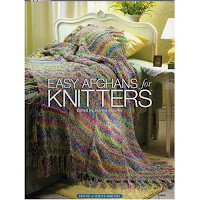 My next door neighbour, who doesn't even know I have a blog let alone read it, is expecting her first child in February. I bought 500g of Cleckheaton Fiddle De Dee cotton [white/blue/mint/lemon colourway] while I was in Wangaratta in July. A couple of years ago my parents gave me this book for Christmas. I found a pattern I thought would work with the yarn and modified it for my needs. 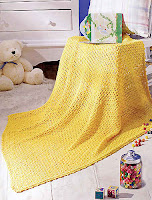 It was a beginners' lace pattern so it was monotonous and as the blanket got larger and heavier, the knitting became more unwieldy, even though I was using circular needles and all the weight was either in my lap or on the lounge [couch, sofa] beside me. The 6mm needles [US size 10] were hard to use for long periods too. However, it was a pretty fast knit - each 50g skein did about three pattern repeats [24 rows] and I used just under nine skeins for the knitting and a little more than one skein for the crocheted border.

The knitting of my version is finished. It doesn't look like the afghan in the book but that doesn't matter. It was never my intention to duplicate the picture in the book; that would be impossible: my yarn is variegated and thicker. I'm looking forward to seeing how the pattern comes out after blocking.

Photos of my version after the blocking and the ends have been sewn in!
Posted by Lynne at 11:08 am