The saga of a blanket

Back in May, I took an entrelac knitting workshop. Sometime in July, I cast on for an entrelac blanket. The blankets I knit are for Wrap with Love and measure 70 inches by 40 inches. It soon became apparent that a blanket knitted in squares 10 stitches by 20 rows would become very monotonous so I did what I always do in this situation - redesign!

I decided to have one panel of entrelac, one panel of stripes, repeated for the length of the blanket. I finished the first entrelac panel. I picked up stitches along one edge and started the stripes. One word - yuk!

But I was not defeated! I carefully separated the two panels by unpicking the cast on edge [I wasn't going to undo 8 inches of stripes, was I? LOL] I threaded in some waste yarn and continued knitting stripes. I'd figure out what to do with the entrelac strip later.

I soon had an idea that the blanket was not wide enough – I measured: sure enough, it was only 26 inches wide; 14 inches too narrow. No problem – I would knit a border around the stripes! So I continued on my merry way, knitting stripes until the strip was 14 inches short of 70 inches [that’s 56 inches folks; this English teacher can do maths! LOL]

Now, faced with an ever increasing [in length] border, I decided that a border of little squares [10 stitches by 20 rows] was the way to go. I could knit two lengths the same as the striped strip [try saying those last two words 10 times quickly] then pick up the stitches on the waste yarn and the not-cast off end to knit the top and bottom strip of squares. This worked very well but, now that’s it’s finished, I wish I’d put a plain border between the stripes and the squares. Ah well, we live and learn, don’t we? 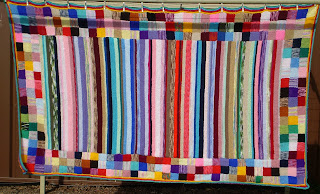 And what of the original entrelac strip? Some of it was unpicked to make little squares and the rest of it is in the frog pond waiting for the next time I need short pieces of yarn!
Posted by Lynne at 6:56 am