Recently I found a new pattern for knitting teddies. For the past few years, I have knitted teddies from the Trauma Teddy pattern I found at the local library. You can see some of my previous bears here [scroll down a bit]. This was the pattern I was experimenting with in a previous post. My experimental bear worked very well - I knitted him in "double knitting"; that is knitting a tube on two straight needles by casting on an even number of stitches, *K1, yf, slip 1 purlwise, yb* and repeating that to the end of the row, turning the work and keep repeating. At the arms I simply transferred the stitches to the appropriate needles and used a third needle to knit the chest and back to-and-fro. I knitted the arms as tubes too and knitted them into the bear while doing the chest/back. I then went back to double knitting for the head and closed the head with Kitchener stitch [grafting] after stuffing the bear. I think it was successful because he doesn't look too different from the bear I knitted the conventional way and spent much longer sewing up! LOL

Anyway - the new pattern was found in The Friendship Crochet and Knitting Book which can be bought from the Ku-ringai Branch of Knitters' Guild NSW. These bears are smaller and have much prettier heads! The pattern consists of two flat pieces [knitted on straight needles] then sewn together. I have tinkered with the design and am now knitting in the round on two straight needles. 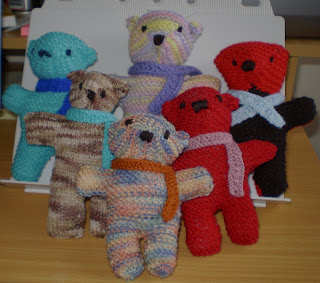 And here's where the production line mentioned in the title began. I couldn't quite understand the 'making up' instructions after completing the knitting. I asked WM, who enjoys the occasional challenge of origami when we have Japanese visitors, and he worked it out for me. I knitted and he sewed up the bears! He looks very awkward but the job gets done and who am I to complain if he does the sewing for me? Then last Friday we took one step further. His mother taught him to knit when he was a child; last week he knitted a scarf for one of the teddies! It's the brown scarf on the bear in front. Admittedly, I cast on and off but he did the two rows [144 stitches] of garter stitch. He says he did not enjoy it and it won't continue but send good thoughts/prayers our way and you never know...
Posted by Lynne at 3:41 pm