I finished the socks on Thursday afternoon except I have to graft the toes with Kitchener stitch. That's a new technique so it requires concentration, not to be done in the evening by artificial light.

Having a headache, I had no desire to sew up the 112 squares of the afghan I finished knitting last week. So I cast on for a scarf using a novelty yarn I had bought at the local supermarket for 50c. As I am listed in the local Community College brochure for autumn term (May-June) to teach knitting, I try to knit in various yarns to have samples to show my students. Mind you, last year the class didn't go ahead because of lack of interest. I'm guessing it's the cost rather than a general lack of interest in learning to knit.

Anyway, the yarn is called Knitwise Pricewise #001, by a company called Saleutions, which is the same company that produces the Sean Sheep range. It's 55% polyamide and 45% polyester and is very soft. The 40g ball has about 24m (25 yards) of yarn in it. It is composed of two strands, in this case a strand of long royal blue lashes (and I mean long: think false eyelashes of the 60s not the lashes in Patons Feathers) and a strand of little bobbles in pink, yellow, mauve and green. The recommended needle size is 6mm (US 10). The colour is actually darker than this photo shows. 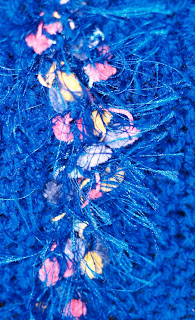 By the way, their website, should you be curious, is very user friendly.

Being only 24 metres, I knew it wouldn't make a scarf of any length so I used a royal blue 8 ply acrylic for the main part of the scarf. I cast on 18 stitches, knitted 16 rows of acrylic then two rows of #001. I then continued the scarf with 12 rows of acrylic and 2 rows of #001 until I was nearly out of the novelty yarn. Because I had carried the novelty yarn up the side of the scarf, twisting it around the first stitch of every other row, I wanted to save enough yarn to 'sew' into the other edge so that they looked the same. The whole thing was knit in garter stitch with chain stitch selvage.

Finally I added a 15cm (6 inch) fringe and, for a novelty scarf, it looks pretty good. I wouldn't wear it myself but someone would, and if my class doesn't happen I will donate it to charity. I bought three balls of this yarn in different colourways so I guess there are more scarves in the offing.

Here is a photo of DD with the scarf - she obviously didn't want her face to be shown! :-)

By the way, Happy Easter to all who celebrate this special season.

Clip art from Crossmap.com
Posted by Lynne at 10:15 am