After finishing the shrug on Saturday, except for sewing on the button (which I'm not sure where to put), I had to find another project for Lint for Lent.

On Saturday afternoon I had used my free day from Stashalong to purchase some new acrylic yarn. Big W now carries a range called "Carnival Effects" - this range includes stripes, camouflage and fair isle, and I was curious so I bought four balls of 'fair isle' to try out. There is no indication (on the ball band or the website) of the optimal number of stitches to use to get a fair isle effect, but I guessed a fairly small number of stitches would be most likely to give the greatest effect. I also figured stocking stitch would be the best stitch to use. I didn't want to knit a scarf (they're not much good in stocking stitch anyway). Finally I decided to be brave enough to try socks!

I knitted a basic pattern from The Twisted Sisters Sock Workbook: top down, K1 P1 rib, stocking stitch, hourglass heel and wedge toe. I finished the first sock in two days and am now working the instep of the second sock. Because I only had a set of four dpn I found it a bit tiresome to knit on three and have one free, so today I exchanged an unused set of 4.00mm for another set of 3.25mm dpns - knitting with five is so much easier.

The yarn is not really giving a fair isle effect, although it is an interesting self-striping pattern; and, without any effort on my part, the stripes on the first sock match fairly well with the stripes on the second sock, which I wasn't really expecting!

Being 8ply acrylic knitted on 3.25mm (US 3) needles, the finished fabric is not soft but it is certainly warm - and there are always people who prefer acrylic, perhaps because they are allergic to wool.

So, my first pair of socks knitted-in-the-round is almost done; notice I don't say my first ever pair of socks - I started a pair of socks in the 1970s but they were never finished. I remember being at my grandmother's house and seeing the pattern in the Sunday paper - she gave me wool and the appropriate needles and off I went. I don't know why I never finished them. I'm certain that I would never have worn them even though they were probably quite fashionable back then! I don't think I've ever worn knee high socks!

So, here are some photos of the 70s socks. 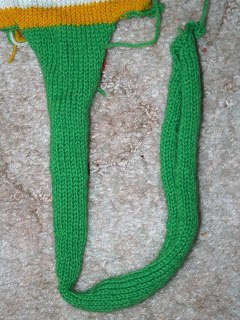 They are knitted on two needles; the foot is seamed at the side and the leg at the back. I guess I must have gotten bored because I only knitted one and started the ribbing on the other! One day I may even finish the second sock.

Do you think this is the world's longest unfinished project - 30+ years?

Edited 8 April to include photos
Posted by Lynne at 9:12 pm