I had so much fun adding photos to my blog yesterday that I couldn't wait to add another! LOL This photo was taken by me using DH's SLR digital camera for the first time. The size of the project made taking a photo very difficult(for me). 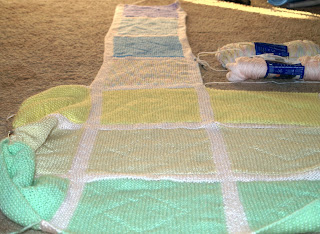 This photo of my current WIP was taken January 11. When I returned to this WIP on January 1, only the three squares in the front centre of the photo were done, and the four squares beyond that were partially completed. I knitted that first strip by the intarsia method, but got tired of untangling seven yarns so decided to knit a maximum of two colours at a time.
This was originally part of another project which was knitted vertically but didn't work, I couldn't get the pink borders to line up when I tried to sew the two strips together. Deciding to use this piece as a project in itself meant that I had a pink strip where I didn't want it and therefore had to knit one set of squares along the cast on edge (to the left of the photo) and two sets of squares along the right edge.
The subtle diamond pattern in each square is to make the knitting more interesting for me - 74 rows of garter stitch per square is just boring!
The finished work will be 28 squares with a striped edging to make the total work 70in x 40in. I have four and a half squares to go before stitching it up and adding the edging. Estimated finish time: Friday 26 January.
Posted by Lynne at 11:04 am