I finished Wrap #4 last night - I just had to sew some loose ends in today. Yay!!

This wrap was started on Christmas Eve 2004; the 28 squares knitted up quickly enough but I don't like sewing so I took ages to getting around to putting them together. Because I used yellow as my "kick" colour (a Kaffe Fassett term), I joined the squares using yellow but my stitches were uneven and the yellow stood out like a sore thumb! Of course it took ages to rip the stitches out! Then, naturally, I didn't touch it again for months.

As of 1st January, 16 squares were joined and 12 were waiting for attachment. Yesterday I needed a break from knitting (you know, too much knitting and certain muscles start to ache!)so I decided to work on this project. I was getting a bit tired of it (my stitching has improved but I'm still slow) when I realised that the end was in sight and I was determined to cross that finish line. When it was done, some of the edges looked a little scruffy so I decided to crochet a border. As the wrap is 74in x 41in it took quite a while, but two minutes before midnight I was done!

So here it is, the completed wrap (and my first photograph - thanks WM)

And a close up: 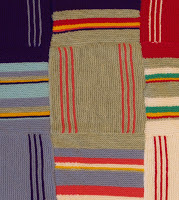 The photography session took nearly as long as some of my projects, but WM did take over 130 photos!
Posted by Lynne at 1:32 pm