The first week of January is almost done. It was as wonderful to have various family members visiting at Christmas and to visit other family members, but it seems a long time ago, despite being less than two weeks! Even New Year’s Eve seems longer than a week ago.

WM has returned to a normal work roster after a four-day weekend for Christmas and a three-day weekend for New Year. It’s summer here (although you’d never know it from the cool temperatures and rain we've had this week) so my quilting class is in recess until February. I've had lots of time in the sewing room and I've tried to make it profitable.

In the weeks leading up to Christmas, I spent many hours pressing, sorting, cutting and storing scraps. This is after a couple of days of that activity (the strips were cut specifically for the project mentioned further down this post): 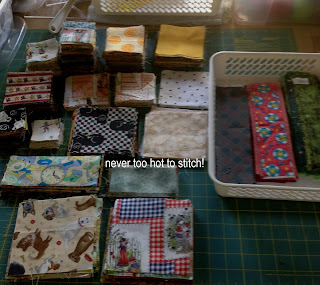 Some of my tubs (shoe-box sized plastic containers) were getting very full; most notably the ones containing 2 1/2" squares, 3" squares and strings/strips of all sizes. 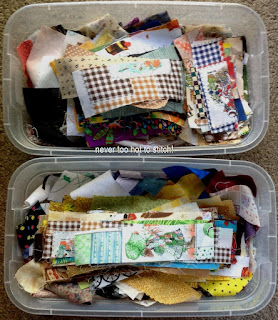 Before Christmas I began a “leader/ender” project that took over my sewing time. The project I had planned required me to make lots of HST units measuring 2.5”. That took care of the 3” squares – I still haven’t made enough and I'm running out of squares! So far I've made 320 units (I need 400) and trimmed 104 of them! They call to me constantly from the edge of my cutting table where I have them stacked in groups of twenty for ease of counting. Here are 200 stitched HSTs waiting to be trimmed!

The unused squares call to me every time I sit down at my sewing machine – they are right beside hard-working Jan waiting for the next time a leader’'/ender is needed. 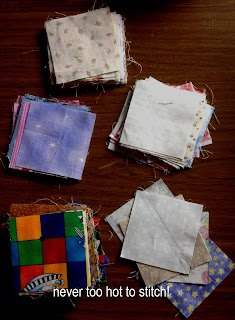 In November, DD and the Grandboys came for a visit. They wanted to sew and decided on ‘spider webs’ so we began making monochrome 60° triangles from strings which we had first sewn into 8.5” squares. They, of course, did very little sewing and little progress was made. After they left, I cut up 144 x 9” strips (of various widths) in five colours –yellow, green, purple, blue and red. I wanted to see how it would work out and sewed all the yellow strips into blocks then cut the triangles. It didn't take me long to realise that we were, in fact, not making spiders webs but giant hexagons! 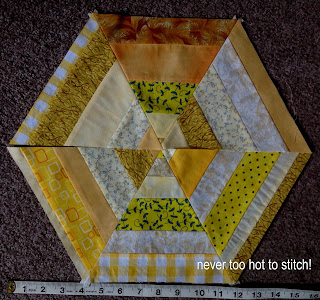 I looked at pictures on the internet and discovered that spider’s webs were made up of eight triangular units, not six; and that they were generally not made in monochrome fashion!

So, when DD and the family were again for Christmas, we made the decision to use the triangular shaped wedges in a different way; inspired by this pattern in the book Scrap Republic (by Emily Cier). Emily’s pattern is called “Slices”. 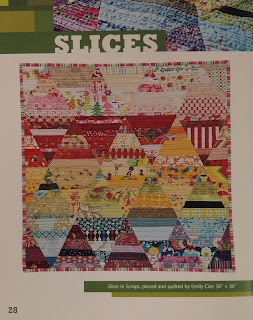 We are not yet sure how we will put the units together – that is still quite a way off. We have made all the yellow, green and purple triangles, leaving some of the red and blue ones (their favourite colours) for the boys’ next visit (probably April). Here is the stack of “wedges” we had prepared by the end of December.

The good thing is, because we made squares first them cut the 60° triangles, I have lots of ‘wedges’ left over – there will be almost enough for another small quilt! 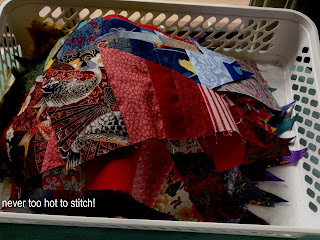 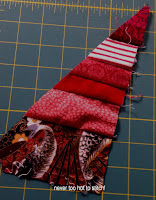 Despite being ‘surrounded’ by these two works in progress, on Monday, my first day of sewing without any need to go anywhere or do something else, I returned to an almost forgotten UFO. I started Green Strips and Triangles in July 2014 but abandoned it as being too much trouble. I distinctly remember I couldn't work out how to make sure the strips were long enough to make the 10.5” (unfinished) squares I required. I didn't want to make the blocks QAYG but somehow, the strips never seemed to work! Time, of course, gives a fresh perspective. I realised in the wee hours of Monday morning that I could use foundation piecing to make the blocks and, if I used a wide strip on the centre diagonal, I could make an 11” square (I actually made them 11.25” to give myself a little leeway), I could then cut the white fabric into squares, sew 1/4” from the central diagonal then cut it into two pre-made squares! Why did I not think of that back in 2014? (Although I had made QAYG blocks on wadding/batting, I hadn't ever done foundation piecing on paper back then but now, having learned the technique, it made perfectly good sense!)

Alas, all that preparing foundations then tearing them away afterwards became such a time drain – I decided there had to be a better way. Eventually, I marked out a ‘template’ on my cutting mat and used that. It worked pretty well; not as well as the paper foundations I admit but I got the job done more quickly! 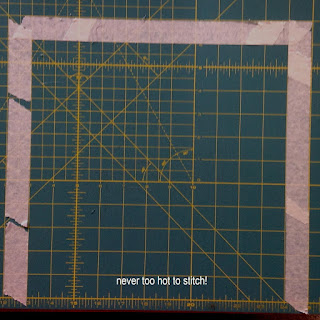 In 2014 I had made four blocks, two of them  wrongly! In three days this week, I made the other twenty-eight blocks I needed! Here are three of them in the setting I plan to use.

As I sewed and pressed and cut and sewed some more, I thought about how I will quilt it... The strips are easy; I'm pretty sure that will be straight line quilting, running parallel to the strips themselves. But what of that self-striped triangle -- what should I do there? I am not competent at FMQ and this is a donation quilt. On the other hand, it might be time to start practising!

What do you think?

I'm linking this post with WiP Wednesday over at Freshly Pieced.
Posted by Lynne at 12:01 am