Something Old, Something New – December edition

Welcome! Come in and read. This post will not be what you expected but you will learn something about me. However, a word of warning: this is a long, wordy post without many photos!

I started Something Old, Something New for several reasons:

Somewhere in the middle of the year, I lost my way. Instead of focusing on two projects (one UFO, one new-to-me technique), I began listing all my projects relating to other people's linky parties! A gentle reminder from a blog friend (hi Lindsey) got me back on track.

In my non-crafting life, I am pretty good with deadlines. I know something is coming up so I do a little towards it, think about it a lot and, generally at the last minute, have a final push to get it done on time. I have always been like this and it worked particularly well for me when I was at teachers' college (1975-1977) and university (2003-2005).

Even in my crafting life, I tend to be pretty much like that. If I have a workshop to facilitate, I will research the topic, try some knitting, think about it a lot then, a few days before the workshop, have a final push to get the samples done and notes typed up. I'm sure this must drive my good friend and test knitter crazy (hi, D.) but it works well for me.

I rarely cut it so fine that I get in a panic but my "last minute" relaxed attitude has bothered people in the past. When I was in a musical society, some people apparently complained that I was always the last to be ready but they were asked, "Is she ever late?". When the answer was "no", they were advised not to worry, that's just the 'way Lynne is'!

Similarly, I know that our quilting group has its "Airing" on the second weekend of April each year. That means that I am still working on quilts right up to the end of March (and sometimes later) even though (I'm told) most people in the group have all their quilts for the next Airing done by the end of December!

I've known this about myself for a long time. It is the way I am. I don't do it to hurt other people and I always meet deadlines unless there are extenuating circumstances.

However, over the course of this year, particularly in the last few months, I've come to realise something else about myself: if there are no looming deadlines, I have a tendency to do as I like, when I like!

Now, where keeping house is concerned, this could be a problem although WM rarely complains (that's why  I call him my Wonderful Man). The essentials are taken care of: I am clean, groomed and clothed; food is bought and stored; clothes are washed and ironed and put away where they belong; our bedroom, the bathrooms and the public areas of the house are tidy -- it's the cleaning-related activities that can be a bit neglected.

As far as my hobbies are concerned, I tend to work on whatever takes my fancy at the time. It doesn't matter that I've listed Project A and Project B as my Something Old, Something New projects -- if there are no deadlines looming, I'll work on whatever I want! Quilting and knitting are my hobbies and I won't allow myself to pressure me! (I, Myself and Me don't always live in harmony! LOL)

November was one of those months. In the three weeks I had to work on my hobbies (after WM's annual leave finished), I chose to spend two weeks ironing, cutting, sorting and storing scraps. My cutting table still looks like this except the containers have a lot more in them and the contents of the basket on the ends has gone from pink to purple to blue (overflowing) to red (also overflowing) to orange: 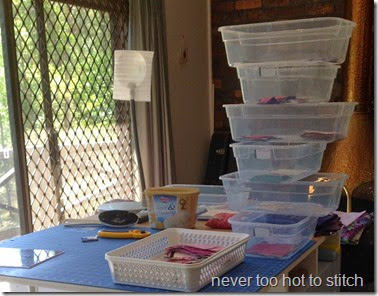 During the last week of November, I had few days to sew. It was hot: the temperature got to 44*C (111*F) one day and was still 37*C (99*F) the following day. The weather knocked me about. I was out of the house nearly every day. The only sewing I did was to finish the four-patches for my Jacob's Ladder quilt. After all the time spent dealing with some of my scraps, I just wanted to sew and sew and sew and sew!

Something Old, Something New as a concept didn't work for me. I should have realised that before I started but I was hopeful that putting my UFOs "out there" would motivate me to get them done!

Something Old, Something New started the year with quite a few people linking up but, as I lost my way, less and less people joined in. In the last few months, it's only been the same few stalwarts that have linked up. Thank you, Sharon, Katie and Kate, for your support throughout the whole year.

There were some months during 2014 where Something Old, Something New was the only post I wrote in a month. However, we did de-clutter our old house by removing one-third of the volume of our possessions, move house and spend time unpacking and getting settled here. There were several times when I considered closing my blog because I had neither time nor inclination to write. I've come out of those doldrums now but who knows what the future holds.

It is with a touch of regret that I bid farewell to Something Old, Something New but, to be honest, it is also with a sense of relief! There will be no more guilt when I enter my sewing room and realise that I should be working on "that project" when it is "this project" that makes my heart sing!

I think I will still be blogging in 2015. One thing's for sure, I will be working on whatever craft project takes my fancy!

For one last time, please link up here if you're inclined to write about your Something Old, Something New projects. And please, dear readers, do visit these blogs. Introducing bloggers to other bloggers is part of what linky parties are all about!