Scraps, as most readers would know, are the core of my quilting. I belong to a community quilting group that makes quilts for donation. We, in turn, have fabric donated to us. Very rarely do we get commercial pre-cuts; sometimes the donations consists of yardage, half-metres, quarter-metres, fat quarters or fat-eighths but most of the time (at least as far as I’m concerned) it is off-cuts, fabric with pieces cut out (for appliqué or English paper piecing) or bits of projects long abandoned.

A few weeks ago, a friend in my quilting class gave me two bags of fabric – she is downsizing and needed to pass on some of her stash plus some saved ‘bits’. I store pieces of fabric larger than a fat eighth in drawers by colour; here is my friend's donated fabric after I finished sorting it. 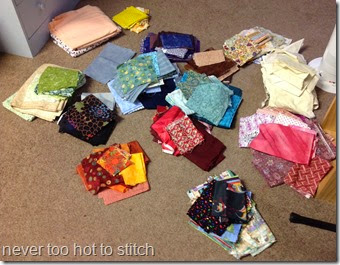 As I arrived at a class a few weeks ago, the owner of my LQS handed me some four-patch units she had been working with and no longer liked. She then handed me the rest of the fabric she was using. Obviously it’s not enough for a whole quilt and I don’t have much Japanese print fabric so I might pass this along. 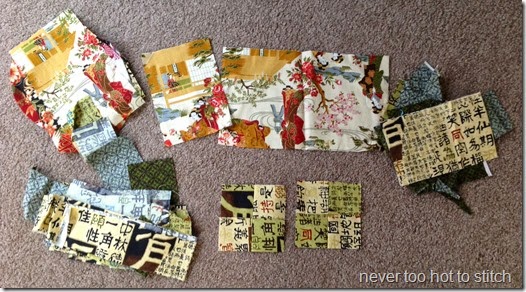 I like the challenge of making quilts from scraps and enjoy looking at patterns and interpreting them as scrap quilts. While working on my Jacob’s Ladder quilt, I realised that just turning or moving the blocks about would result in a different quilt. Very exciting – a new project on the horizon…

I have finished all the units  for my Jacob’s Ladder quilt – 100 four-patches and 100 HST 4.5” squares. Here they are, pinned in groups of ten (saves counting). 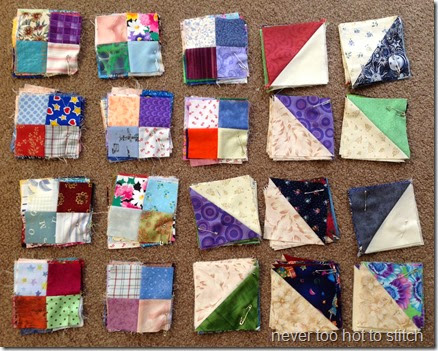 What I need now is a design wall so I can start putting the quilt together – I think WM is going to make one as my Christmas present. I certainly have asked directly (I have found that dropping hints is not effective).

For more than two weeks in November I spent every moment in my sewing room ironing, cutting, sorting and storing scraps. I worked my way through purple, blue, red, pink, teal and green. In the middle of the third week, I got a bit antsy. I just wanted to sew, sew, sew and sew! That's mostly how all the units for Jacob’s Ladder were finished: it went from being a ‘leader and ender’ project to being my main project!

I have found a new leader and ender project -- my container of 3" squares is filling rapidly and I have an idea which involves four-patches and HST but not set as for "Jacob's Ladder" quilts.

I still have to sort through and cut a tray of orange scraps and a tray of yellow scraps (both already ironed). The bases of these trays are about 11” x 8” and are about 2.5”  deep so it’s probably not as bad as this photo suggests – I am working with scraps after all! 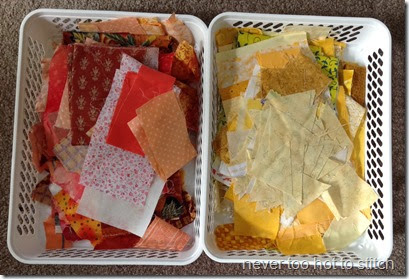 In addition, I have all these bags of scraps that are not ironed. These contain black and white scraps, grey scraps, floral scraps, bright scraps, brown scraps and light-neutral scraps. *sigh*  This is just what I need screaming at me from under the ironing board! I need to find a tub to put all these bags in and hide them away – at least temporarily!)

At least when it’s all done, I will be much more organised and able to sew rather than search for fabrics, iron them and cut them! I am cutting scraps according to my scrap storage system which is both generic (square of all sizes from 2” to 5” in half-inch increments, triangles, strings and crumbs) and designed with specific projects in mind, like Solana Beach (free on Craftsy) and Make It Do (purchased from Craftsy).

My Dutch Cap Hexie project continues slowly. I have removed some of the papers from the finished units and am spending ‘television time’ basting more hexagons. The last time I showed you this I had only seventeen units done;  now I have twice that. It takes me about an hour to add the seven diamonds to each triad of hexagons. At the community quilting group meetings, someone always remarks that I am still working on this project so I’ve taken to calling it my “100 year project”! I estimate that I will need 104 of these units to make a quilt of the size we donate so I’m going to be working on it for a while yet! Then I will need some half-hexies and some diamonds to make it square. I intended for the triad of hexies to point towards the top of the quilt but I can see that it might be easier to make rows rather than diagonals – I will have to think on it further. 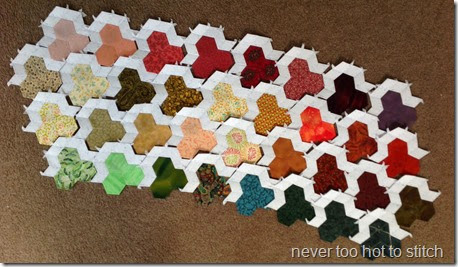 I’ve barely done anything on the Rainbow Scrap Challenge this year because I  haven't been organised. Next year, I’ll be able to take the appropriate container of crumbs from the shelf and get sewing! What's more, I know exactly what block I’m going to make for the whole year!  Yahoo! I’m looking forward to that!

Meanwhile, my Relaxing Robin project, Canary on a Pinwheel, remains untouched. Why? Because I have to cut fabric for the flying geese units and I am over cutting for the moment!

What do you do with your scraps?
Use them?
Store them?
Give them away?
Toss them?
Posted by Lynne at 9:50 am