I had already begun to write this post when I found a link on Sharon’s blog, Vrooman Quilts, about the Scraptastic Tuesday party going on over at She Can Quilt blog. If there’s anything I do know, It’s scraps; so joining in sounded like fun. When you've finished reading here, why not take a few minutes to pop over and see what other people are doing with their scraps?

Over the weekend, I cut and stored all the orange scraps shown in my last post. I pressed the contents of three of those shopping bags screaming at me from under the ironing table.

For now, they are in two trays, waiting to be cut and stored. 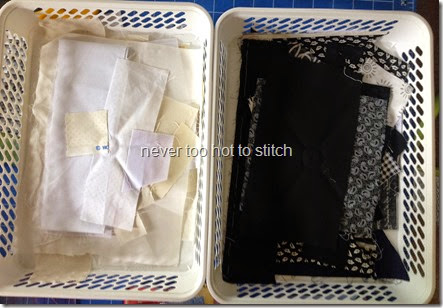 Before class on Monday, I decided to sew some small scrap triangles together – my container of triangular off-cuts (from flying geese, braids and string blocks) was getting quite full. 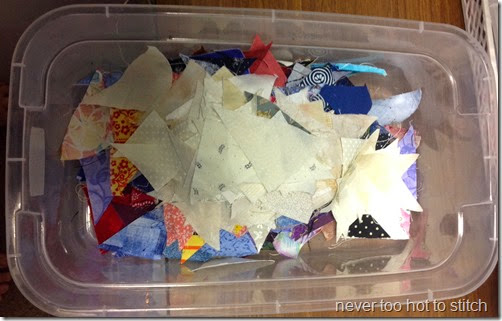 I’m thinking I’ll make some blocks called “Cotton Reels” but don’t hold me to that! 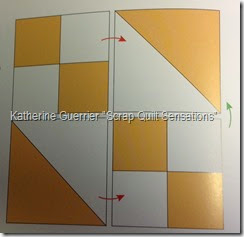 I didn’t think to take the book to class and my teacher and I ended up having a long discussion about how the block went together. In the end, my block is a four-patch but not the one Katherine Guerrier uses! 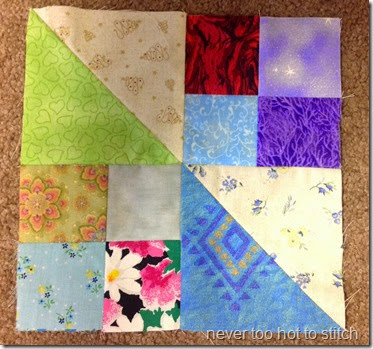 Now, I had several choices:
When ‘mistakes’ happen, what happens next comes down to two things: is the resulting quilt of an attractive design, and is my time being used wisely?

Option 3 was not only the easiest but also satisfied both my criteria. When making quilts for donation, quick and easy but effective is often a good route to take given that I spend a lot of time in preparing scraps for use in the first place. The less time I fiddle around with unpicking and re-making, the more time I have to make other items.

In lieu of a fixed design wall and tired of crawling around the floor, I decided to be inventive! I still have the flannel-backed tablecloth that used to be my design wall (hanging in front of a wardrobe/closet) at our previous house. The rivets WM had attached to insert shower curtain rings are coming adrift and it’s fast outliving its usefulness as a hanging system. But those shower curtain rings gave me an idea – my design ‘cloth’ now hangs from our bathroom shower rail. The bathroom is used infrequently by WM and I so it seemed like a great idea and WM approved (at least as a stop-gap measure)!

See how the second, third and fourth rivets are pulling away from the doubled-over-for-additional- strength fabric?

Here is my design wall in use: with the ‘barn raising’ layout of my Jacob’s Ladder quilt; possibly not traditionally but it works! 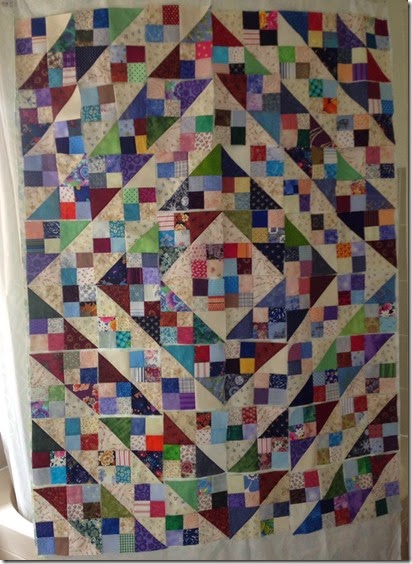 I'm letting it sit for a while before I start putting the blocks together. In the meantime, I’m using leftover four-patches and HST units to make a panel to widen the the backing fabric.

What do you do when you make a “mistake”?