Diagonal Strings is done. It probably shouldn’t have taken as long as it did. The blocks weren’t made by me. They were already quilted. All I had to do was cut and add sashing and cut and add binding.

But you know what it’s like when you’re not feeling the love for the project. It waits. It occasionally growls at you as you walk past.

And eventually you have to get it finished if only to silence that “so close and yet so far” feeling. 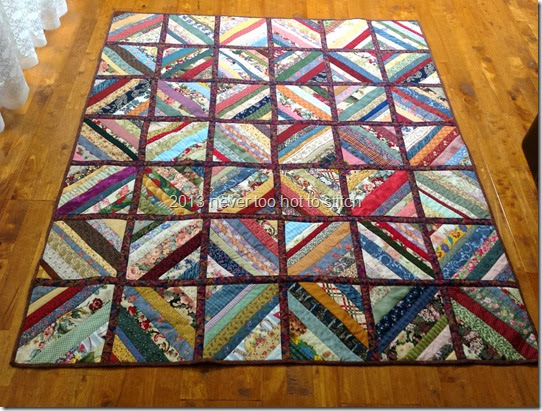 Anyway, it’s done and it’s even got a label (I often forget those on the quilting group quilts). This is the first label I have added while attaching the binding – what a great time saver; and the label is less likely to come adrift too! 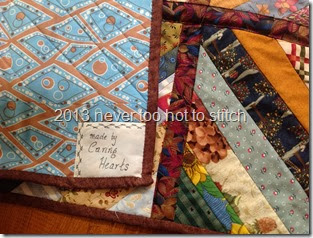 Isn’t that sashing fabric pretty? A whole metre of that fabric was donated; some people are so generous. I also found about half a metre of the brown fabric I used for the binding in our store cupboard; I wasn't expecting to use brown, I was looking for a burgundy, but the brown works perfectly. Don’t look too closely at my corners; I must have gone too close to the corner with my machine stitching while attaching the binding (I’m still a newbie, remember!) – I didn’t have enough fabric to turn properly!

Now it’s ready for next year’s Airing of the Quilts in April. I’m halfway – I promised myself I’d make six and I’ve done three The fourth is nearing completion so I’m not too far behind.

And in just twelve days, Christmas will be behind us and I can look forward to some solid crafting time.

This weekend, WM and I are off to a little village called Ebor in the New England Ranges (approximately 570km, 355 miles from here)  to share Christmas with Mum, my sister, two nieces and their boyfriends, my nephew, my 8-month-old great-niece (this is my sister's first Christmas as a grandmother), DD, SIL and our Grandsons! 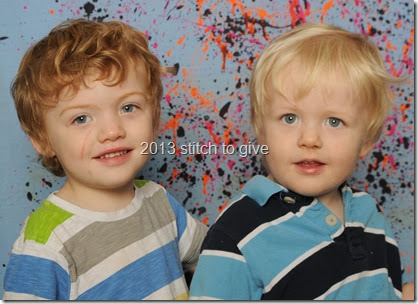 It’s these two I’m most excited to see! Aren’t they handsome? (a child at pre-school produced that scar on Older Grandson’s face – we’re praying it’s not permanent!) The best news is they’ll be here for a whole week and their parents will be here too so we can just be grandparents!

There won’t be much crafting time but family is way more important, right?

Linking up with Thank Goodness It’s Finished Friday which is being hosted by M-R Charbonneau over at Quilt Matters.