I’m about two weeks late in posting about my first finish due to my computer being in the shop for eight days!
My Scrappy Log Cabin quilt is completely finished (except for the label). I basted it before class (with the help of my teacher, the shop owner and one of my class mates) on Monday 2 September as planned. My teacher came up with the quilting design and it’s the feature that many people have commented on when looking at the quilt in “real life”. 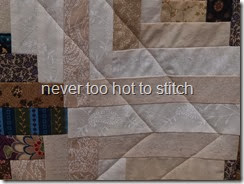 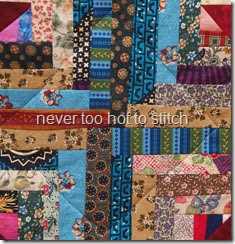 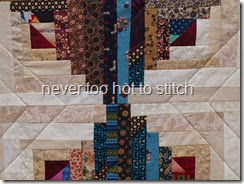 A finish to start the month is a great feeling!

It’s amazing how much was done over four days; especially considering this quilt had languished as a UFO for over twelve months! The quilting was finished on Monday 2 September and the binding was attached and sewn down on Tuesday 3 September. Choosing the fabric for binding this quilt was easy – I just repeated the solid brown I used for the inner border. The quilt was washed to remove all traces of marking for the quilting on Thursday 4 September and photographed on the line while still drying. 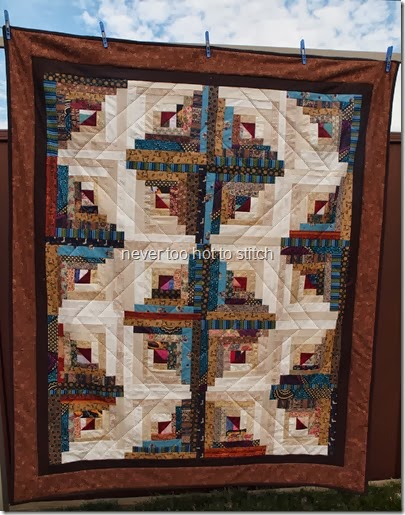 And this is the back (before quilting) if you haven’t seen it before. 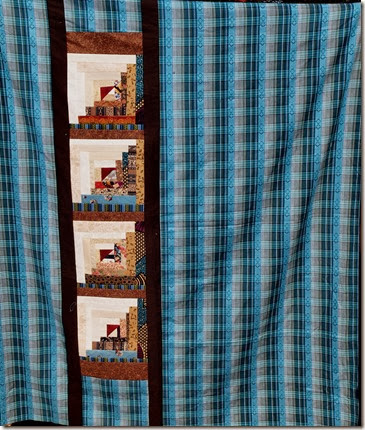 I need to buy a proper waterproof pen to make my labels – the pen I have been using smudges.

I have a very full schedule from now until the middle of October. Early next month, DD and SIL are going on a trip on “The Ghan” (a train) which goes from Adelaide on Australia’s southern coastline to Darwin on Australia’s northern coastline (and vice-versa of course), a distance of 2971 kilometres (1851 miles). This trip takes three days and is to celebrate SIL’s father’s 60th birthday. Two very active, energetic boys under four would not enjoy the trip so they are coming to stay with us for a week. I will probably need another week to recuperate! ;-)

This weekend, I am tutoring two sessions (Double Knitting and Intarsia & Picture Knitting) at the biennial camp of the Knitters’ Guild of NSW – one on Saturday morning, one on Sunday morning. Next week, we have three billeted guests arriving on Thursday for our church conference (Thursday night to Monday lunchtime). Because I’ll basically be out of the house or hosting all that time, my crafting time will be very limited for the rest of the month so I decided yesterday I was going to get another finish “under my belt” in order to continue with my theme of 2013 being a year for finishing projects!

So here is my second finish. 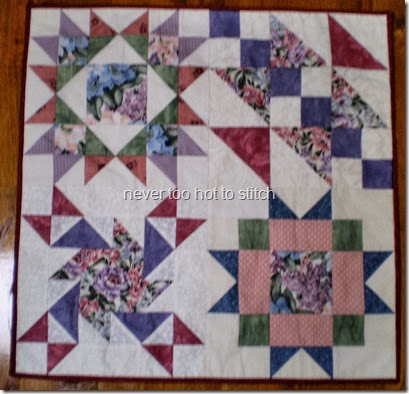 These blocks were not made by me. they are leftovers from someone’s sampler quilt (the same one I’m making which I talked about in this post). I merely joined the four blocks together (in March!). The project stalled while I searched for suitable backing fabric. Working from donated fabric is often a challenge or a compromise. The fabric that I used for the backing is not ideal but it works!
The red in the flowers picks up the colour of the binding which I had already chosen. 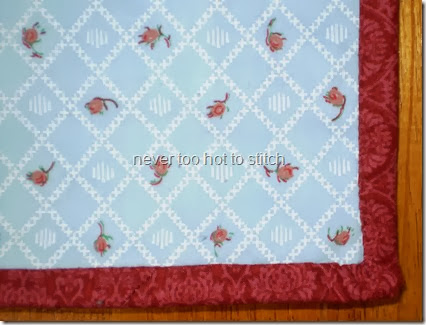 The blue reflects the blue flowers in all of the blocks although it is a lot more intense in the backing fabric. I had to piece this fabric, even though I only needed to make a 27” square – it had been stored for so long that it was filthy along the fold lines. Washing removed some of the dirt but the fabric was also badly faded so I cut the folds of the fabric away and pieced my backing. If you look carefully at the photo below, you’ll see where I pieced it – between the quilting line in the centre and the quilted square on the left. This colour is also more accurate than the one above. 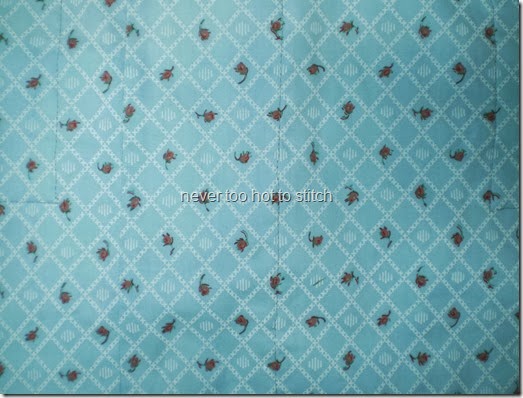 This 24” square quilt is another going to Yasminah’s Gift of Hope after our group’s Airing of the Quilts in April next year. The quilts are given to parents of babies “born asleep” or who die soon after birth. Sometimes the quilt is buried with the baby, sometimes the parents keep the quilt as a keepsake – it is totally up to the recipients.

Last night I finished the first of the Purple Cocoon Socks. Today I will cast on the second sock and I will take them to Camp with me as my knitting project. I have taken a photo of the pattern with my iPad so I will not need to carry the book with me – I was going to have my iPad there in any case!
It’s hard to take a good photo of oneself wearing the sock but here it is: 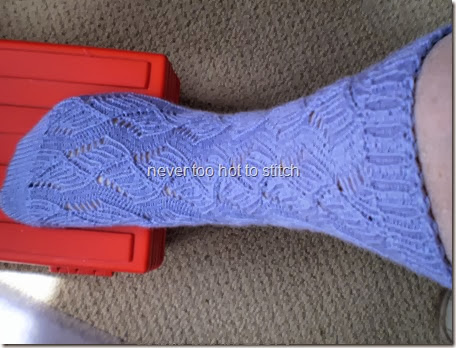 And you know what, the fit in the foot is not too bad after all!

Linking up with Thank Goodness It’s Finished Friday over at Missy Mac Creations (edited to say I'm back from Camp, happy but exhausted -- and that the link is now direct to the TGIFF host page)