Family history research is a very absorbing hobby – absorbing of one’s time, that is!

In the past couple of months, I have added over 400 people to my extended family. I try to include the parents and siblings of all my blood relatives’ spouses. Families with ten or more children are not uncommon among the working class from which my ancestors come so the numbers add up quickly.

So, if you’ve been wondering why I’m not reading and commenting on your blog – or writing my own – my computer time is almost totally devoted to family history research these days!

I’m not one for resolutions (and it’s not New Year) but some self-discipline is called for and I am now going to limit my time spent on family history research each day. I have friends who deserve my attention, followers that expect somewhat regular posts and craft projects that need my attention.
~~~~~~~~~~
There are photos coming but they have all been taken with my iPad so I apologise in advance for the quality!

Ah, shingles; yes, I was diagnosed with that mysterious virus four weeks ago. I spent the first week doped up so high I couldn’t walk a straight line. I was taking anti-viral medication and a daily dose of125mg of heavy-duty pain-killers (pregabalin for those who need to know such things) for post-herpetic neuralgia. But the good news is that the rash has almost completely disappeared and I am down to 25mg (one capsule) of the pain-killer a day so I’m thinking relatively clearly and almost ready to drive my sewing machine again!

I have been doing some crafting. A week after I was diagnosed I was supposed to teach a workshop on knitting with variegated and hand-painted yarns. I worked diligently through my fog to prepare for that workshop but, alas, it didn't happen; there's no way that I could get my befuddled mind into gear and teach! But samples were made, ripped out and made again.

I even managed to knit a whole dropped-stitch scarf in a commercial variegated acrylic yarn that I’ve dubbed the “brussell sprout” scarf because of the colouring.

In theory, knitting this scarf should have made the blotchy tendencies of this yarn less obvious but, unfortunately, this scarf is still so blotchy the pattern is almost completely obliterated! 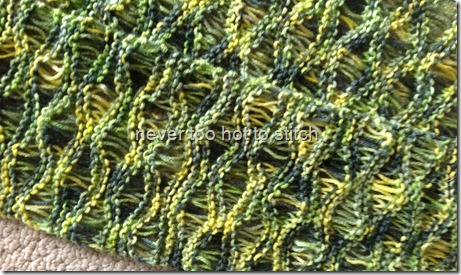 If it wasn’t acrylic, I’d consider over-dyeing it. I’ve been successful in dying white acrylic yarn but I’m not confident that I can get colours dark enough to overdye this one!  Never mind, the scarf will still make the journey west to Mudgee next week when I tutor a workshop on “knitting with dropped stitches”.

A new project, called the “Mudgee Wrap”, has also been started for the same workshop but there isn’t much to show yet.

I haven’t been courageous (or foolish) enough to use my sewing machine while taking painkillers with that famous warning: “This drug may cause drowsiness. Do not operate machinery.” The idea of sewing through my finger is not at all appealing! But I have paid for classes so attendance is “mandatory”. Bring on the hand stitching… 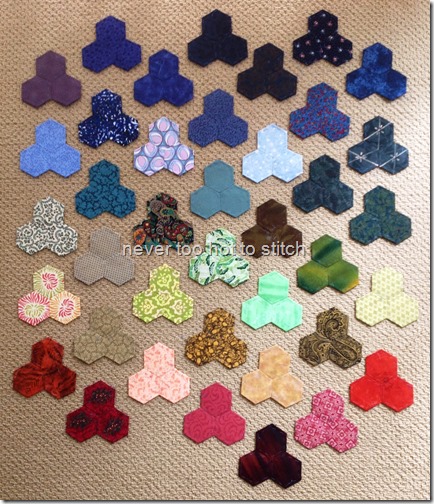 – which basically means I have drawn and cut hexagons from 4” fabric squares, basted those hexagons and joined them in sets of three to create thirty of these: 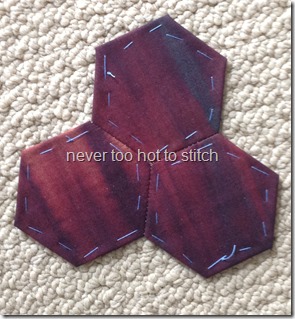 There has been some humming and hawing over setting these triads but in the end I have decided to go with my original plan and have stuck with my “Dutch cap” shapes which I talked about in this post. In reality, there is quite a lot of fiddling around to create these shapes because each diamond is added separately to the triad then the diamonds are joined together. 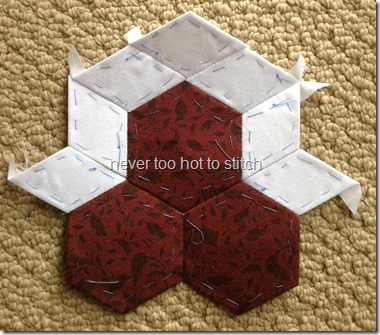 So far I have made only one. I hope it will get easier with experience, otherwise I’ll be ripping them all out and looking for an easier setting!

So that’s my last four weeks summed up. Not much to show for it but I am supposed to be taking it easy and concentrating on getting better. The thing is that I just don’t feel “sick” and most of the time forget that I have been ill.

Onwards and upwards, as they say! In other words, back to my Mudgee Wrap which I ambitiously hope to finish in one week!
Posted by Lynne at 3:18 pm