A few months ago, I watched an excellent documentary on the ABC (Australia’s national broadcaster) called Making War Horse. I expected it to be about the movie and wondered why it was being broadcast so long after the movie‘s release. But it was the “off-season” (the non-ratings period over Christmas-January: Australia’s summer holidays) so I didn’t think too much about it.

However,  the documentary was about the stage production done by the National Theatre Company (England). I found the documentary fascinating (do watch it if you haven’t seen it – it’s 49 minutes well spent) so when I found out the production was coming to Sydney, I asked WM for tickets for my birthday.

We saw it on Wednesday night – it was breath-taking and deeply-moving. We hardly knew where to look, there was so much going on. At the same time, the puppets are so life-like in their movements that we soon forgot that we were watching puppets. One no longer sees the puppeteers/actors. We have not seen the movie so the story line was new to us; I was so pleased it had a “happy ending” but, even if it hadn’t, the whole production was just brilliant and I’d love to go again before it closes.

We live in the metropolitan area of Sydney but, as part of my birthday treat, we stayed in the hotel in the same complex as the theatre. We had been upgraded to a one-room apartment with views over Darling Harbour (one of the inlets in Sydney Harbour). What a great birthday present.
Yesterday, was a national holiday in Australia. We call it ANZAC Day. It is a day of commemoration of all those who have served our country in war and is held on the date of the landing at Gallipoli (a beach in Turkey) by Australian and New Zealand forces in 1915 as part of the British forces. The Allied forces lost 440,000 lives, of which 8,709 were Australian,  in the ensuing campaign which lasted until 8 January the following year.

The flags on the Harbour Bridge were at half mast until early afternoon. 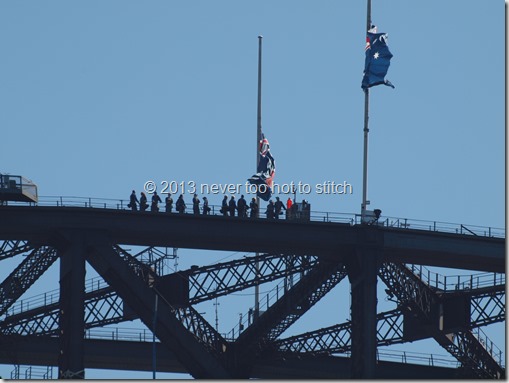 Because it was a holiday, WM and I took advantage of the beautiful weather and spent most of the day ferry-hopping around our beautiful harbour.

After a late lunch/early dinner at City Extra restaurant at Circular Quay, we hopped on the ferry back to Pyrmont Bay, collected our luggage from the hotel concierge, and caught the light rail back to Central and a train back to our home town! We had to wait quite a while for a taxi, a lot of people were returning home from a day of celebrations but we finally arrived home a little after 7:30pm, happy but extremely tired.

Here are some more of the myriad of photos WM took during our day away from home!

I’m sure it’s true that it’s one of the most beautiful harbours in the world! And we saw just a fraction of it!
Posted by Lynne at 4:27 pm