After the frustration and tears of Saturday, I took it a bit slower on Sunday. I kept being reminded of a saying my mother had when I was a child, “more haste, less speed”. I didn’t understand it then and, half a century later, I still don’t really understand it. I gather she wanted us to move quickly but…


said to mean that if you try to do things too quickly, it will take you longer in the end

Apparently it’s a uniquely British saying, which makes sense since my mother was born and raised in Kentish Town, north London!

Anyway, I digress. Back to the quilt I showed you in yesterday’s post. The eagle-eyed among you would have noticed that the blocks should have alternated horizontally and vertically but the column I had just attached was identical to the one beside it!

Of course, the first step to fixing it was to rip out two 66” inch seams. That was slow going because real ripping (in which I just use the seam ripper to tear at the stitches) results in seams coming undone that I want to stay sewn. Even so, I had to sew a few seams back together before proceeding. I was tempted not to but I knew I would regret it.

The pictures show 66” of ripped out sashing and the offending blocks removed from the top. 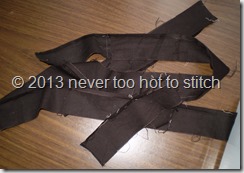 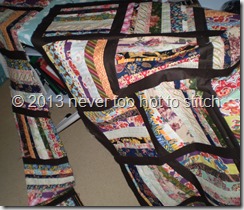 Then came some pressing with my new Semco cordless iron (WM reckons I bought it because it’s purple but I’ve wanted a cordless iron for years. And this was really inexpensive. I will talk more about it in a later post). 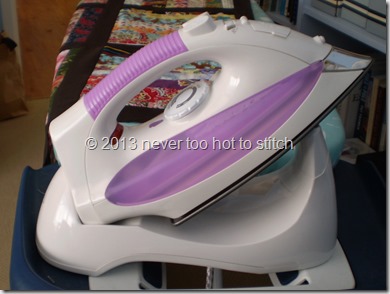 And lots of pinning (yes, I’ve learnt that lesson). 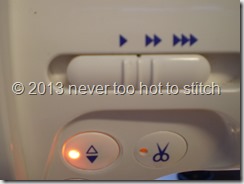 All of which resulted in a finished top which is now basted and is in the process of being quilted on my normal machine. {Yes, I know I have a quilting frame but the garage is still hot! Despite the fact that it’s autumn, the temperature is forecast to be over 32°C (90°F) every day this week! And the humidity… phew!}

I do my basting in class as much as possible. There is a big table which I can use which saves me crawling around on my hands and knees and ensures that the backing and top are pulled tight enough (I always have a problems with one or the other if I attempt to baste either on the floor or on my quilting frame). But the best part is my teacher and the store owner, sometimes even my class mates, jump in and help which gets the job done in record time and makes it much more fun!

Now the race is on – will I get it finished in time for a big reveal for Thank Goodness It’s Finished Friday (which I am hosting this week)? Or will I have something else to show? Is it possible that I will host and not have a finish?