one of those days

You know the kind I mean.

Where you seem to take two steps forward and one step back.

I started out with these: 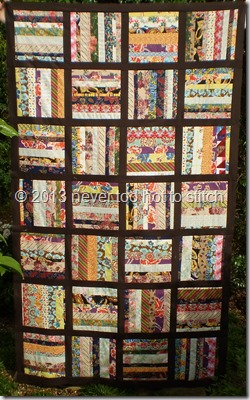 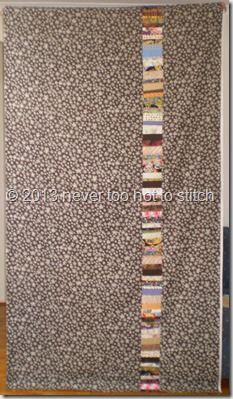 When I first started at Caring Hearts Community Quilters, no-ne told me what size to make the quilts, just “single bed toppers”. I didn’t know what that meant but then I remember that the wraps I knit were also single bed toppers and they are 40” x 70” (28 ten-inch square in a 4 columns, 7 rows configuration). 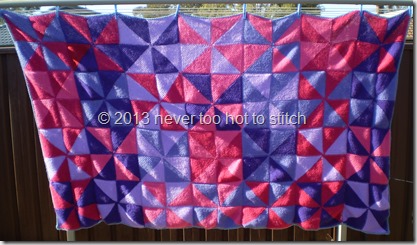 A few months passed and I found out that the quilt size required was approximately 54” x 64”.

Clearly this quilt was too narrow and too long. I have known that for several months but have only just got to this UFO.

It should have been no problem. Remove the bottom row. Make two more squares. Cut some more sashing. Put it back together.

Cut the back down and find a way to make it wider. Ah yes, ten inches wider. Three sashings at 2” each plus a four inch panel of the main fabric – just as well I still had some of the fabric in my stash.
~~~~~~
I decided to work on the backing first – it’s more straight forward. First cut it down to 70”. Then unpick two 70” seams to remove the pieced panel.

Pin the second sashing to the other side of the pieced panel and sew. Good job. Uh-oh! What’s this? The sashing has been sewn on upside-down so that the joins are facing the outside. Unpick 70” of stitching. Re-sew.

Iron and cut two four inch strips from the main fabric. Join to make a panel. Sew sashing to panel. Perhaps I should have used pins? Err. I think I’ll get away with it!

Join two narrow panels to each other. Sloppy! Should have used pins! Rip. Re-sew!

Sew the narrower of the two side pieces to the stitched panel. Haven’t you learnt yet? Use pins! Rip. Pin. Re-sew! Pin last piece of backing to the panel piece, sew!

Backing finished – go and have a late lunch and read for a couple of hours!
~~~~~~
Ah, feeling better. Time to face the quilt top.

Rip the bottom row. Assess the situation. Find some appropriate scraps. Fortunately I have some strips of three of the fabrics that are used in other blocks. Measure the original blocks. Cut strips. Iron. Cut more strips. Sew strips in pairs. Join pairs (Look, mum, no pins!). Continue until blocks are made. Press, measure for size. Oops, too small.

Find another strip for each block. Rip one seam in each block. Add new strip. Press. Trim to size.

Make another sashing strip. Add to other side using pins. Sew. Press.