This post could also have been titled "thinking is not the same as doing"!

Knowing that I was going to be away from home for the best part of six days, I did a lot of thinking about what projects I would take. I even blogged about my WiPs in my last post and hinted at which ones would be travelling with me.

We had an unexpected visit from the family late in the afternoon and into the evening of the day before I left. It was late by the time I packed. I included three craft projects -- the ones I had been thinking about for days.

After climbing into bed around 1am, I realized that taking my hexagon project with me wasn't going to work (for a variety of reasons) so I got out of bed, took it out of my carry-on luggage and replaced it with my appliqué hearts blocks. I knew that there were still about a dozen hearts that needed to have the blanket stitch added. I also knew that everything I needed - blocks, embroidery floss, needles, threader and scissors were in the case ready to go. But appliqué isn't the best choice for crowded waiting rooms -- what I needed was knitting.

Back in bed, I realized that it would be a good idea to take another ball of sock yarn, just in case. Socks are such a quick knitting project and I might just get the one I had already started finished. I couldn't be bothered getting out of bed again, I was sure I'd remember in the morning but, of course, I didn't! As I said, thinking is not the same as doing!

I turned the heel on my first night away so I had only the leg to go, easy knitting; easily finished in a day or two.

However, there shouldn't be a problem. I had bought my cardigan and hadn't finished the first ball of yarn. The project was packed with one additional ball of yarn -- ready to go!

On the train I knitted some of my cardigan. I found a knot in the yarn, two rows short of a logical ending point. So I unpicked to the beginning of the row and reknitted that row and the next. There is no way I would have had enough yarn to knit another row but I had reached that "logical finishing point" so that was okay. It was then that it occurred to me that I shouldn't travel without knitting essentials -- a tapestry needle and some waste yarn, for example. The next instructions were to thread the live stitches on to waste yarn. No worries, I was on my way to mum's -- she is a knitter and therefore has such things.

I borrowed what I needed from mum and then the reality of "thinking" instead of doing (also known as packing in a rush) hit me -- I was about to work on my cardigan fronts and I needed two balls of yarn; I had only brought one. Okay, so I'll knit one side now and the other when I get home -- it's only a few days away after all.

Are you tired and bored with this story yet? It only gets more interesting! When I bought the yarn, I had no idea how much I would need to knit myself a cardigan so I bought all that they had in one dye lot. That was 13 x 50g balls which didn't seem like enough so I compared the other balls which were from two dye lots. One was definitely different and the other was pretty close; so close in fact that, under the lights in the Big Box Store, I couldn't see any difference. So I did what we tell new knitters not to do -- I bought two balls from a different dye lot! You know where I'm going with this, don't you? The one ball that I packed is one of those two balls! So there'll be no knitting on this cardigan until I get home!

And so I turned to good ol' mum again. She's a knitter so she has stash (of course she does, I buy it for her!). She gave me a 100g skein of gorgeous (the colour not the fibre) purple 8ply (DK) acrylic yarn and I chose 4.00mm circular needles from her collection. I knit loosely and that's the recommended size on the ball band. I knew I would have access to the Internet here at the motel so I was pretty sure I would find some kind of pattern on Ravelry.

Well, who knows that a child's jumper takes more than 310 meters of 8ply yarn? I found only one pattern I even began to like and started knitting it. What a disaster! The yarn is very thick and the baby jumper, knitted in garter stitch, was as stiff as a board. It didn't help that it was knitted from the top down and the cable on my 60cm (24") circulars was so thick I couldn't do magic loop! It also didn't help that the free pattern was poorly written!

And so I ripped out that harsh, beautifully colored yarn, and it is now becoming a Drop Stitch scarf! (Ravelry link) I hope it softens up in the washing/drying process -- I wouldn't want it around my neck the way it is! 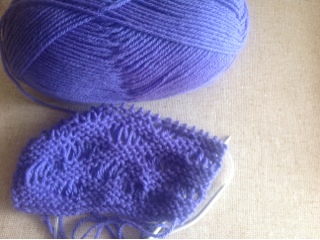 The moral of the story is (and I'm talking to myself here because none of you would ever do what I have done) -- pack in advance of a trip away. Don't just think about what you'll need, read through every step of a pattern and pack for every contingency!