iPad as a knitting tool

Last Sunday I shared about using an app called "Errands" on my iPad to help me get organised. The post generated more than the usual number of hits on my blog for an individual post and a wide range of responses from those who left comments.

Thank you to those who were concerned that I would become too "addicted" (my word not theirs) to my iPad and related technology. The truth is that it is very easy for me to spend several hours on the computer or iPad -- I just love the things I can do on both.

But it is also true that since I found the app and loaded my projects into it, I have been on track with all the things I wanted to do and have even managed to finish some ahead of schedule. Now I just turn on my Ipad, touch the app and voila! I know exactly what I should be concentrating on today. The app may not be necessary or even useful to others but it sure works for me and I have felt a great sense of accomplishment in the last week.

So today, I want to share another free app which I have found useful in my knitting. This one is the "lite" version but it does what I need it to do so i don't feel any need to buy the "full" version.

Therefore, fellow knitters, may I present to you Knit Counter Lite? (It’s actually an iPhone app but works just the same on iPad). 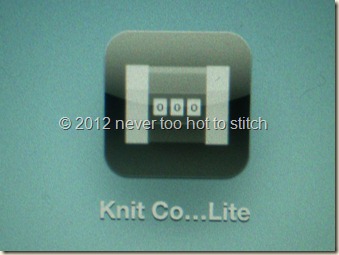 This is what it looks like on my iPad right now. 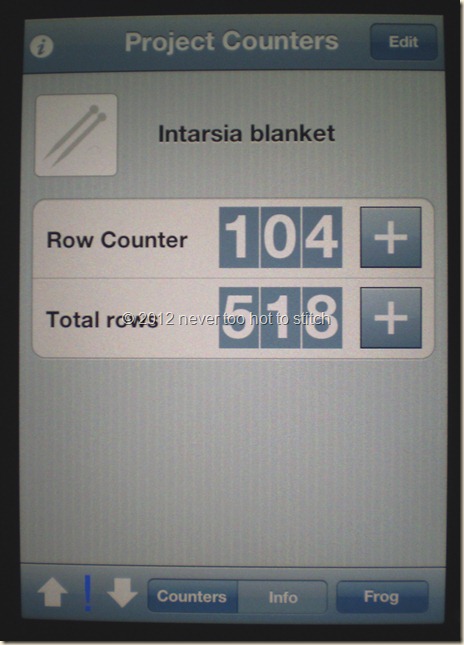 The row counter tells me I have done 104 rows since I last showed you a photo of the Intarsia Blanket in progress and that I have done a total of 514 of the 700 rows needed to complete the project. When I hit the top plus sign (to go to 105 rows), the bottom one is connected so that it turns at the same rate. I programmed it to do that – making such “modifications” is very easy using the edit button (top right of screen)..

There are other functions built in too but I have no need of them at the moment so have not fully investigated them.

The app writers say that the full version is needed to keep track of different projects. If the projects were complicated I suppose that would be so but I have used this counter to count rows on other projects without losing track of my intarsia blanket.

Say, for example, I was knitting a sock and wanted to know how many rounds I had completed from the cuff to the heel (so that the second sock would be the same). I would just add another row to this counter, like this: 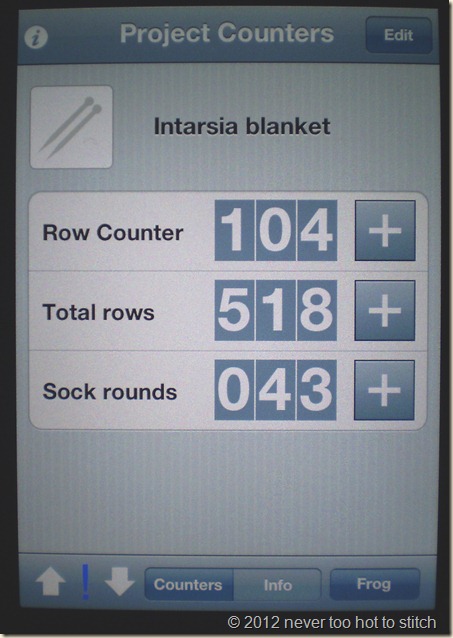 This shows that I have so far completed 43 rounds of the sock -- notice that it has not affected the row count for my intarsia blanket at all!

This app has been on my iPad for some time and takes no time at all to use – it took much more time to take photos and write the post!

So there you have it friends - the iPad is not just a toy, it's a very useful tool!