I found out yesterday, through the power of the internet, that knitting designer Robbyn Kenyon passed away in February.

I followed Robbyn’s blog, The Yarnpath, for several years and had communication with Robbyn via email.

In January 2010, Robbyn decided to stop posting to her blog in order to focus on fighting the battle with cancer.

Earlier this year, I knitted a cowl which I called Dragon Skin Cowl. 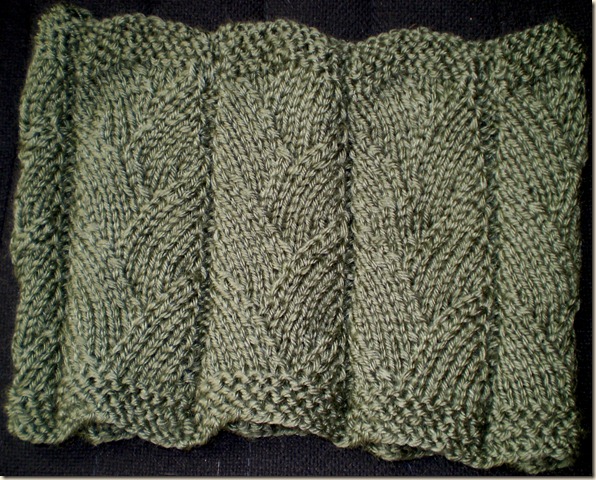 The stitch pattern for the cowl was based on the “Dragon Skin” stitch found in Barbara Walker’s library of stitch patterns. The Alexstraza Cowl (Rav link), which is the pattern I used, was a design by Robbyn Kenyon.

I missed Robbyn’s blog when she closed it down and it saddens me that she had been gone for five months before I knew about it.

In her memory, I think I should cast on another of her designs (Rav link) that will live on after her.

Thank you, Robbyn, for sharing your patterns freely with knitters of the world. And thank you for the joy you brought to the readers of your blog and the people who “attended” her Knitting Chatter sessions on Saturday nights (USA time so I could never get involved).

Though I never knew you personally, and we had lost contact online, I will miss you.
Posted by Lynne at 12:11 pm