Do you believe you can’t draw?

All my life I have had a fear of drawing. When I was about ten, I drew a picture of a horse. I knew it didn’t look right so I took it to my father for advice. “It’s out of proportion” he said…

… and that was it. I carefully rolled that picture, along with all my other drawings of that time, put a rubber band around them, and put them in the bottom of the sock drawer. When I was about thirteen or fourteen, the art teacher at school basically told me to “stick to maths” when I tried to make a (compulsory) poster for the upcoming school fete. My younger brother is one of those naturally talented people who draws beautifully and seemingly effortlessly, while I struggled. I watched him and convinced myself that “I couldn’t draw”.

In 1996, a friend convinced me to attend folk art painting classes with her. The classes were inexpensive and to stop her nagging, I decided to give it a go. I enjoyed it but it stirred up a longing in me to create something of my own. Folk art was just copying someone else’s creative work (as was knitting, crochet, embroidery and cross stitch for me at that time).

After a chat with Kym Hart (son of the late Pro Hart) while on a trip to Broken Hill, I enrolled in a landscape painting class in 1998. I nearly quit - the teacher knew nothing about working in acrylics; she was an oil painter and didn’t realise that one can’t mix a colour in acrylics in the height of summer then wait ten minutes for the teacher to return while the paint dries rock hard on the brush. But, unfortunately for her and fortunately for me, she became quite ill and we got a new teacher – one who not only knew his mediums but could teach and encourage.

I spent two years under his tutelage then, with his encouragement, applied to do a fine arts course at TAFE (I really only wanted to do painting but had to take the whole course not just the one subject). The entry requirements included a portfolio, an interview and a drawing test. I cried for the full hour it took me to make a poor copy of the still life in front of me but, somehow, the two teachers who interviewed me saw some potential and I was offered a place. Here was a God-given opportunity I could not pass up.

I attended TAFE for eighteen months until our financial situation pushed me back into the workforce. In those three semesters, I did three drawing classes (each three hours of agony long) and one print making class (which is heavily reliant on drawing). I struggled with each and every one of them – especially the life drawing and printmaking classes. Some days I had to force myself just to stay in the classroom and it was difficult for me to put a mark on the paper and keep breathing!

There have been some great drawing moments in my life. In 2006 I participated in this mural with a group of artists under the tutelage of Graham Cheney. It was drawn in graphite and charcoal on a white painted plaster-board wall. Some of my work includes the lettering and part of the building in the centre of the mural. 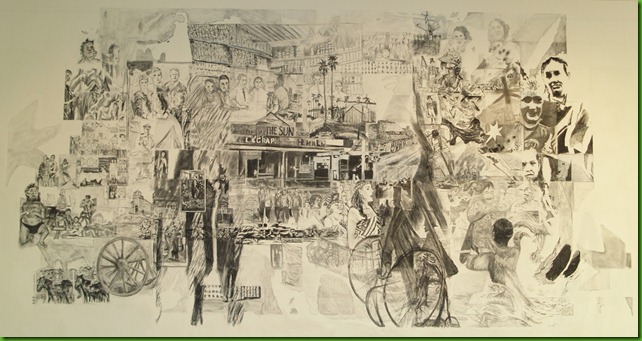 I have not really tried to draw since then. I still panic when I have to copy something. Older Grandson accepts my cartoonish drawings and can even recognise what I have drawn but I know my scribblings are far from “good”.

In March, DD and I attended the Craft Fair at Rosehill. A bubbly lady named Jane Davenport gave a demonstration on how to draw pretty faces. I watched that demonstration with great interest but only tried what I had learnt once.

Which brings me back to the distraction of the creative retreat at Gilburra mentioned in last Wednesday's post. One of the many creative activities on offer was “the paint shed”. I painted for the sheer pleasure of painting – at home, although I am retired, and have the materials, the easel and the room, I never give myself time to paint because there are more “useful” things to be done –- knitting and making quilts for charity for example. It was great fun to paint that weekend. But the thing that gave me the most joy was done using those big fat chalks used by children in a very limited colour range of pink, lemon, light blue, light green, light orange and light brown. 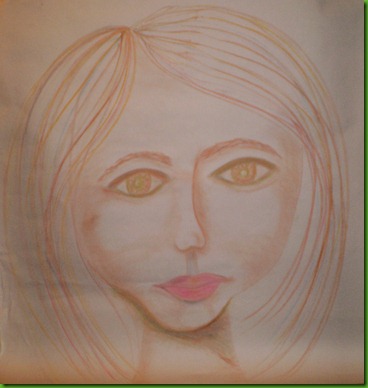 To all those who reinforced the lie, I have only one thing to say: