As promised, some of the more than 100 photos I took while in Moree last weekend.

Firstly, the consequences of flooding, lines of trucks waiting outside town - they weren't going anywhere. 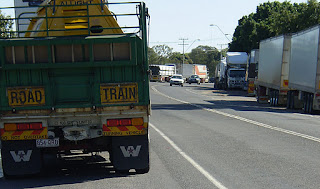 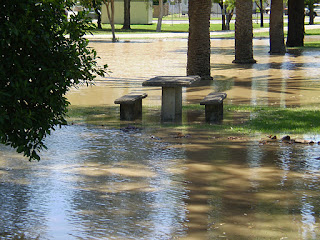 This is the path we walked along the previous day. 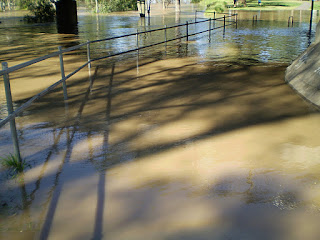 And this is the purposely built Geoffrey Hunter bridge: it is a few metres higher than the worst flood on record. This photo was taken just a few steps back from the previous photo. 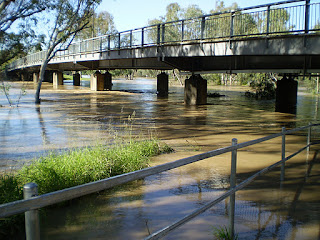 The whole area had a surprisingly carnival atmosphere about it as locals and tourists alike came out to see the river. 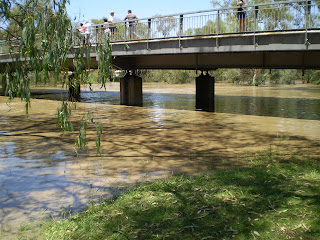 You can get some idea of the speed of the water from this photo. 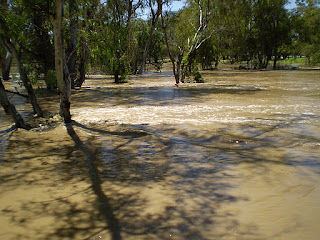 I mentioned yesterday that the road to the north of the bridge had water flowing over it on Sunday morning and was closed on Sunday afternoon. Early in the afternoon it was closed to traffic but pedestrians could walk across. On the other side of the river from where we were staying, the town side, there was a gauge to measure the water depth. That's not 0.0 metres I've photographed: it's 10.0 metres (30 feet). The river peaked at 10.20 metres, just six centimetres short of the highest flood ever recorded. 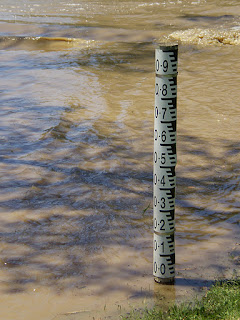 Later in the afternoon the bridge was closed to pedestrian traffic too - the water flowing over the road by then was deep and fast!
Yesterday I showed you a picture of the Edward Street bridge, a low lying bridge about one kilometre west of the much higher Geoffrey Hunter bridge. That photo, seen again here, was taken on Saturday afternoon. 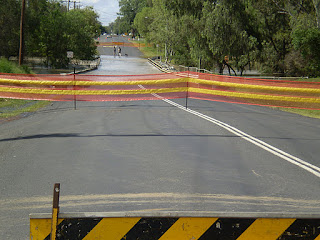 And here is the same view on Sunday afternoon - that red and yellow temporary barricade in the middle distance is the same one as the foreground of the previous picture! 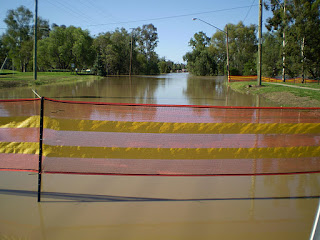 I chose not to take photos of peoples' homes inundated with flood waters - who am I to intrude on their grief?

But this sight saddened me too: Moree Family Services is just at the foot of the Geoffrey Hunter bridge. Anyone for basketball? 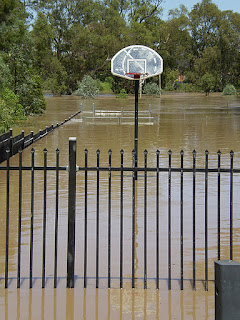 This fence is the only thing saving their children's play equipment from floating away. 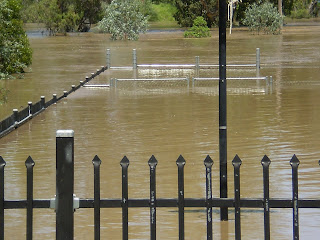 I'm not very competent with the video function on my point-and-shoot camera but I thought it was the best way to show this scene of the play equipment; it was together in one piece when I first saw it on Thursday morning - now look at it!

Labels: away from home, floods