the little boy and the hat

Once upon a time, not very long ago, there was a Little Boy who didn't like anything on his head.


He fussed when his Mummy dressed him.
He fussed when his Grandmother tried to dry his hair after his bath.
But, as he grew older, about twenty months or so, the Little Boy began to run around the house with a sheet over his head.
Sometimes he stepped on the sheet and fell over, but at least the Little Boy had something on his head.
His Grandparents, worried about his fair skin in the harsh Australian sun, thought it was time the Little Boy learnt to wear a hat.
After all, the Little Boy loved being outside and fussed if he had to stay indoors.
His Grandparents bought two hats.
"Perhaps he will learn to like one of them," they said to each other.
And so it came to pass that his Grandfather, who had outgrown his hair many years ago and therefore wears a hat year-round, showed the Little Boy one of the hats that had been bought.
When the hat was placed on his head, the Little Boy tore it off and threw it on the floor.

Patiently, his Grandfather retrieved the hat and put it back on the Little Boy's head. 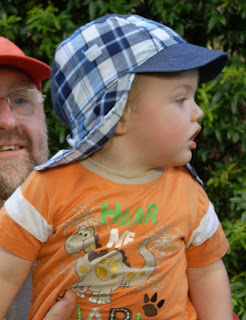