in which I speak of socks

Last month, I was supposed to teach a full day workshop on knitting socks from the toe up. Unfortunately, I became very ill with acute sinusitis and was unable to stand, let alone tutor all day.

In the weeks leading up to the sock workshop I had, of course, concentrated on sock knitting.

In a previous post, I showed you my sample sock (seen again at right with my 20cm long dpns).

Before I even designed the sample sock, there was the pair I started in April and finally finished last month for the Wonderful Man. 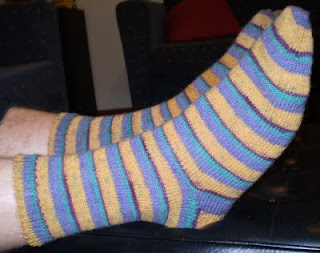 Next, I cast on another pair of self striping / "fake isle" socks. I thought I might wear them but they are way too big for me. I had become so used to knitting man-sized socks that I automatically made them 72 stitches - much too wide in the foot for me!


So, two days later, I cast on yet another pair of socks -- I had to keep practising Judy's Magic Cast On. For me, it's the trickiest part of the sock. The cast on itself is easy but knitting those first two rows can be a little fiddly on 2.25mm (US 1) needles.


The socks I cast on are Ribbed Ribbon socks (Ravelry link) by Wendy Johnson from her book, Socks from the Toe Up. These socks don't have the short row heel we were going to do in the workshop. However, I decided it wouldn't hurt me to try something new so I did the heel exactly as the pattern stated.
I knitted the first sock on two circulars (according to the pattern). I find it cumbersome - sliding the stitches from the plastic cable (where they often catch) on to the needle; and the needle-not-in-use always seems to be in the way.Give me dpns any time!
The combination of circular needles and a lace pattern makes for very slow knitting. It took me three hours to complete one pattern repeat of 24 rounds! With dpns and "plain vanilla" socks, I could finish the whole foot or leg in that time!

I also can't decide whether I like the socks or not (for many reasons):

In our house, we have a saying: "If in doubt, don't!"
Because I couldn't decide whether to continue or rip out the Ribbed Ribbon Socks, I cast on yet another pair of socks on the Monday afternoon. It would have been good to have gone to the workshop on Saturday wearing a pair of handknit socks!


This third pair is knitted from Patonyle (the old 50g balls) which I bought at the Australian Country Spinners Mill Shop in 2008 and had almost forgotten. 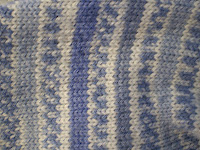 In fact, the yarn didn't have a label but a search on Ravelry confirmed my suspicions. The pattern is "plain vanilla" because the yarn is self striping. I used Judy's Magic Cast On (32 stitches) and increased in every second row until I had 64 stitches. I knit until the foot instep touched my leg then did an hourglass heel (which is what I would have been teaching the following Saturday). Because it was late at night and I was tired and not well, I made a mistake and had to rip out the whole heel again. I went to bed that night thinking about socks.

When I woke on Tuesday morning, I knew the answer! The increase in alternate rows creates a narrow toe which doesn't suit the shape of my foot. I need a completely different shape, one more like a commercial sock.

And so I did the only sensible thing -- I ripped out the whole sock! If I had continued and ignored the toe, I would have regretted it and probably never worn the socks.
I still have to bind off the first sock and cast on the second, so it's just as well I didn't want to wear them to the workshop-that-was-postponed, wasn't it?

As for the Ribbed Ribbon socks - what do you think? Should I finish the pair, or count my losses and rip this one out?
Posted by Lynne at 11:21 am