Today is the monthly meeting of the Blue Mountains group of the Knitters' Guild of NSW and I am tutoring a workshop in no-sew grafting.

So I thought it would be a good idea to show some knitting!

Here is my baby wrap for Angels for the Forgotten. I started it in "feather and fan" (also known as "old shale") but I got bored so switched over to garter stitch. 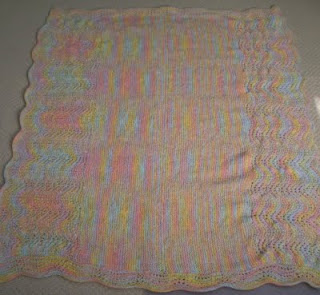 It's interesting that the ball I started with on the left pooled but the ball which started the right side striped! Ah, the surprise of knitting with variegated yarns!

I knitted it in two pieces so the curves went the same way on both ends.

I thought the straight edges looked bland so I knitted two borders of feather and fan and grafted them on with no sewing - I used the method I will demonstrate in today's workshop. This is the same method I used to graft all 128 pieces of the Pinwheel Blanket. 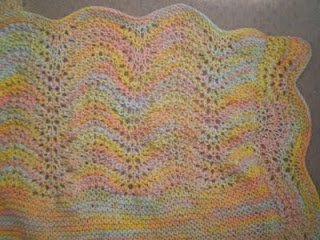 I know there's a line across the middle (which hopefully is not too apparent to you). It happened because I grafted the wrong side with the right side so I have made a stocking stitch row where there should be a garter stitch row. I didn't notice it until I had grafted on the first side border. By then I had grafted 656 stitches so was reluctant to undo it and fix it.

Yes, I agree, it's not perfect but it doesn't affect the usability of the item and the baby won't care. In the end I decided that there was potential for disaster in trying to rip out the grafting and that my time is worth more than one line across a blanket. I could fake one in the other direction, but what would be the point?
Posted by Lynne at 10:09 am