in need of repair

DD was given a musical bear for her first birthday. She couldn't say "Harmony" (the brand name) so she called him "Numinny"!

When she was two, she learnt she could open the zipper in the back and pull out the battery and all the wires.

I sewed the zipper closed but she had managed to lose the two wires that made his nose glow when music was playing.

Older Grandson has recently discovered Numinny and seems to like him.

This is the condition the bear was in last week 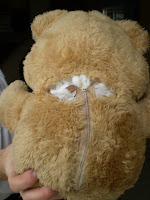 ... in need of a little repair work, both internally and externally. 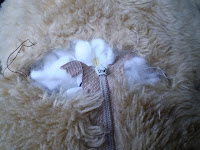 Since Numinny was in such poor condition, WM did an internal exploratory and found the missing wires. Numinny is now back in the nose-glowing business. Most of his paws pads are working too.

Now it's up to me to sew him back together (and sew that zipper shut again - all it takes is a couple of stitches across the top of the zipper).