the first of winter

It has been unseasonably cold here; in fact, we had the coldest May on record. The last three days seem to have been non-stop rain, at times exceedingly heavy - the kind when one must turn up the volume of the television or iPod.

As I look out the window, at the small patch of sky I can see (thanks to our neighbours garage just over a metre from my window - uphill from us) all I can see is grey, grey, grey.

To relieve the greyness, here is a photo of a banksia flower trimmed off the neighbours' shrub (hanging over our fence) when WM was tidying the garden last week. The flower is about 25cm (10 inches tall). The banksia is a species of shrub named after Sir Joseph Banks, a botanist who accompanied Lieutenant James Cook on the voyage during which he 'discovered' the east coast of Australia and claimed it for England (1770). 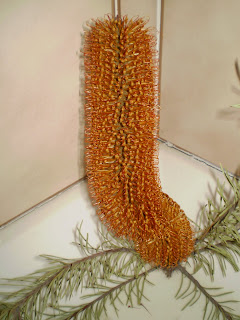