moving on a Friday afternoon*

*hum "Groovin'" by George Benson while reading the title of this post!Warning: This is a long post - you may want a glass/cup of something delicious to get your through!


It will take me weeks to sort through all the stuff to be moved or discarded from my old study and who knows how long it will take DD to go though her things (she may not be living with us anymore but her possessions haven't left home!).

But for now, my new studio looks like this (clockwise from the door):

two bookshelves: the one on the left is 60cm (2 feet) the other 90cm (3 feet). The empty spaces show you that I have not yet finished moving books and magazines. 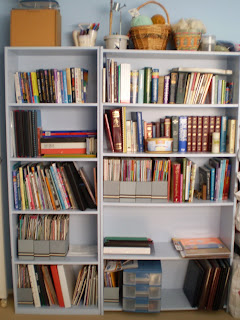 two drawer units: the blue one holds fabric (I already have the beginnings of a stash -how did that happen?), the grey one hold mostly DK weight wool sorted by colour: yellow and brown, green, blue, purple, red and pink

my computer desk - workplace central! To the right you can just see my very old (pre-DD) metal Muppet garbage bin, faded but enjoyed by GS#1 as a drum. The black shape to the right is the back of my chair, facing my work desk. 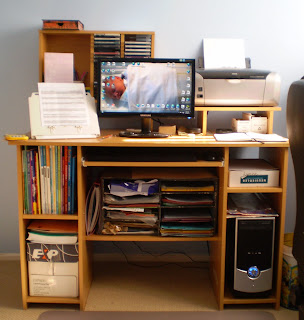 Perpendicular to my computer desk, under the window, is my desk/sewing table; to the left of the desk was an empty space which currently holds four archive boxes containing yarn, a roll of fusible web and a roll of stabiliser; to the right is a built in wardrobe (closet).
Under the desk, the red box is used to transport our "goods and chattels" to and from the quilting workshops and store things, like a walking foot and a stippling foot. The clear tub holds all the paraphernalia from when DD and I were learning Japanese. I am hoping to find another home for that tub! The black "thing" to the right is the electric cord and foot for the sewing machine! 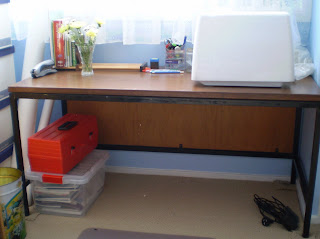 On the fourth wall are two chests of drawers (back to back) currently with Quilt #2 rolled up and lying on top. As luck would have it, my cutting mat (35 x 23 inches) fits perfectly on top. Now I can access my cutting mat from three sides not two as before when I was using it in the kitchen! The height is still a bit low but WM assures me that he will build a little table to go on top and raise it to a better height (I prefer a working height of about 90cm (3 feet). 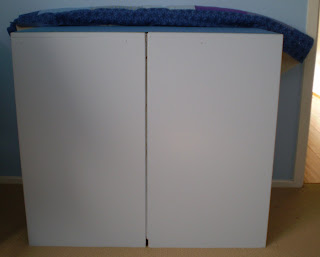 I hope you've enjoyed the tour of my new studio; I'll keep you posted with future developments!
Posted by Lynne at 8:52 am