On Saturday, DD and I attended the second of our "Sit and Sew" workshops. The teacher was impressed with our finished quilt (seen in this post) and with the progress we have made on Quilt #2 (seen in this post). However, she didn't want us to work on Quilt #2 as there was nothing new to be learned - to finish it we need only the skills we had learned in the first workshop.

Instead, Elizabeth strongly encouraged us to start a new project so that we could learn something new. We had brought some fabric and some batting to learn stippling (freeform quilting) but that was not enough to keep us busy for five hours! Here is my first atempt at stippling! 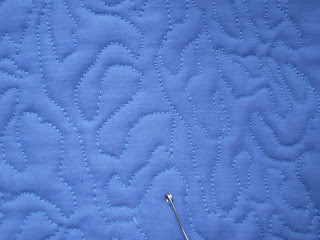 Both of us chose to do applique and, for the first time, are working on separate projects. DD was very brave. She has little sewing experience and chose to do a wall hanging of a geisha from a pre-packaged kit, I think by the end of the day she was beginning to question her wisdom! The picture has been taken from Aussie Patches website.

I had been thinking about naive colonial style houses for a couple of weeks as my first applique project: houses are made of all straight lines so it would not be too difficult. Elizabeth gave me some books from her reference library to look through but I already had a strong idea of what I wanted so she gave me some copy paper and left me to my own devices. Within a few minutes I had drawn my own design which I then scaled up to create a template for a twelve inch block. 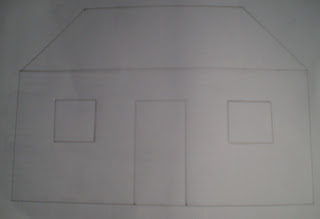 What took the longest amount of time was selecting the fabrics I wanted to use from the limited range in Elizabeth's warehouse. The kind of fabrics she sells are mostly traditional florals or Asian fabrics, with some novelty prints - not really my thing at all (except for the Asian fabrics which, though lovely, were not right for the quilt I had in mind).

I ended up choosing a pack of semi-solids/tone-on-tones (20 x 7 1/2 x 10 inch pieces - the black in the bottom right is not fabric, it is the background of the photo) 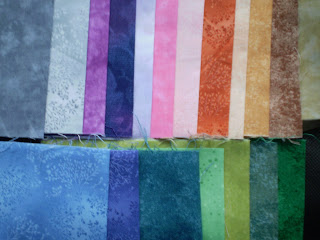 and ten fat quarters of checked fabrics (plaids). DD keeps stirring me; I don't usually like checks and she thinks it's a great joke. But I am after a particular look and the checks are right for what I have in mind. 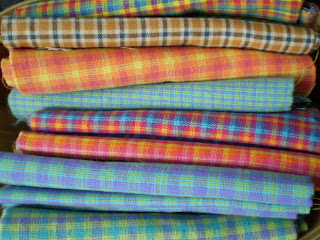 The fabric I chose for the background is a dark bottle green (because Elizabeth didn't have any light coloured solids that I liked with my selection of checks). The dark green made the colours "pop" and looked good in theory but now I have begun my first block I wonder if I have made a mistake (constructive comments welcome - I'm on a steep learning curve here). 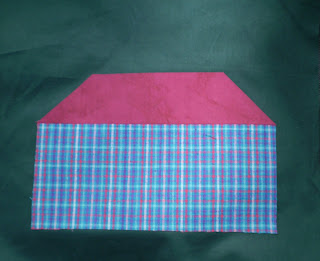 I think I will have to choose some bright thread for stitching around my applique. I also think the thread might need to be thicker than the standard Guterman sewing thread (again comments welcome). I don't want to buy a lot of different coloured threads - but I don't know what colour to use. Because at least two of the checked fabrics have yellow in them, I can't use yellow to add brightness as I planned to do.

So, the stippling, the designing, the drawing of my template, choosing fabrics, and a bit of tracing, cutting and ironing are all I did in the five hours I spent at the workshop. Choosing fabrics is always a slow process (I keep being distracted by fabrics that catch my eye but aren't relevant to the task in hand) but I don't think I got my money's worth out of this workshop.

Elizabeth, on the other hand, made a profit: not only did we pay to attend the workshop, but DD bought a kit, I bought over $100 worth of fabrics, fusible web and stabiliser for a single (twin) bed quilt. Plus we both booked in for the workshop in June; which will be our last, GB#2 is due early in July.

I am hoping to be able to find classes closer to home; driving alone for an hour and half in heavy traffic is no way to start a workshop - it stresses me out! Not to mention the hour and half to drive home when I am tired and the sun is in my eyes.