After my post last week about socks, in which I explained that getting socks that fit my feet and are the right length for my legs has been quite challenging, despite the fact that I have successfully completed lots of pairs of socks, I bring good news on the sock front (although this pair isn't for me). I am working on a pair of toe up socks.

I have never knitted toe-up socks before but plan them to be the central pattern of the workshop I am teaching in September so thought it was time to give them a go.

I tried a figure eight cast on - five attempts later, I still couldn't get it. I tried a provisional cast on using a crocheted chain - but I'd have to graft the toe and that seems rather pointless, doesn't it?

So I listened to my inner EZ - I unvented a cast on. I call it my two needle backward-loop-over-the-thumb cast on. It simply means that I used a simple looped cast on and put stitches on two needles alternatively. Deceptively simple and possible whether one uses dpns, two circulars or magic loop (all of which I have to master before September). This cast on (which I unvented) could be described as a figure 8 cast on with a twisted loop. 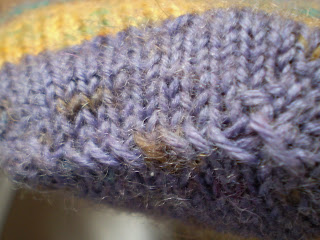 Now, I'm sure that when my Montse Stanley book arrives from England, this cast on will be in there.

But for now, I'm just chuffed with my own achievement (until I face the short row heels).
Posted by Lynne at 8:27 am