I have knitted many socks.

I have tutored a workshop in knitting socks.

Why, then, can I not knit socks that actually fit me?

I have knitted four pairs of socks for myself.
The first were too big and were frogged.
﻿


The second were worn, but they were also too big and were frogged.

The third were knitted from the yarn from the first pair. The first sock fitted like a dream.

The second sock, you may remember the saga, was knitted several months later on the same needles, with the same yarn, by the same knitter, and was Way. Too. Big. 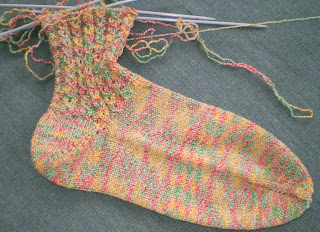 The fourth pair of socks have languished for months waiting for the toes to be grafted.
﻿

Why have they waited so long? I think the legs are too short and I'm not sure that the foot is long enough - it's snug, perhaps a little too snug!

I think I may have to frog back to the heel turning and add another pattern repeat.

As if that wasn't enough; last week I was cleaning up the knitting corner - it's the place where DD and I store UFOs, WIPs and hibernating projects. I found a small drawstring bag.

"What's in that?" I wondered, aloud, to myself.
You guessed it - a lone (knitted for charity) sock, waiting for its mate. *sigh*