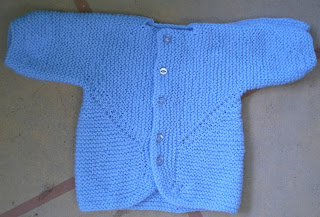 I finished knitting this Baby Surprise Jacket some time last year but it was only last month that I finally got around to sewing the buttons on! It's knitted from 5ply acrylic bought at the Australian Country Spinners Mill Shop in Wangaratta in July last year. It is incredibly soft, especially compared to the harsher acrylics I used in the blue Tomten below. 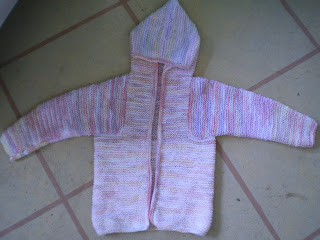 This is the first Tomten I ever knitted [February '08]. I had no idea how much 8ply yarn it would take to knit so it is an interesting concoction from my own hand dyed acrylic. I was going to rip it all out but I've decided it's not that bad; someone will like it! It's still waiting for a zipper but it will be finished by the next Guild meeting - that's when I anticipate handing over a heap of knitted items to my contact for Australian Inland Ministries. 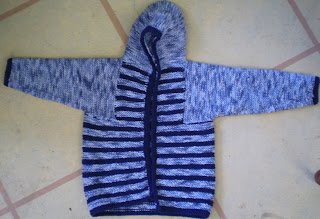 And finally, the jacket just off the needles - another Tomten. I had two 50g balls of Saluetations Knitwise in navy and another three balls in a variegated blue. The 'pink' Tomten above weighed in at a little under 250g so I figured that I had enough of the Knitwise to knit another Tomten. I started with stripes - four rows of navy, six of the variegated, in keeping with the ratio of yarn that I had. It looked good when I first started but by the time I finished the body I was sick of the striping. I called it my "Sad Bumble Bee Jacket" - sad as in 'blue'. I decided to knit the hood and the sleeves in the variegated then trim the jacket with the navy. Ultimately I used less than one ball of the navy and less than two balls of the variegated yarn. DD thinks it's 'so cute' - I'm not too sure. But, working on the premise that one woman's 'so-so' is another woman's 'cute', I'm sure someone will like it. That's one of the advantages of knitting for charity - someone will like it even if I don't, and it will always fit someone! I would never knit something badly just because it's going to charity but I remind myself that I don't have to love it! [In fact, it's better if I don't, it's easier to give away!]

The leftover yarn [of which there is rather more navy than I had expected] will, probably, be used in a beanie or a pair of wrist-warmers/fingerless mitts!!

In our knit4charities forum, someone said that washing acrylics with creme shampoo and conditioner would soften them; they also suggested tumbling them in the dryer on warm. I know from experience that dyeing acrylic makes it softer so the heat must have some effect! I'm off to give it a try!!
Posted by Lynne at 8:55 am