First, an old topic - the Myrtle Leaf shawl:
I'm running for the finish line on the centre panel with 34 repeats [of 40] completed!

And now for the Wedding Rhyme Game. I started this game so I'd better set some rules!

This is the oldest pattern I own, in the sense that it is the beginning of my pattern collection. It's the first full garment I ever knitted [mum did the v-neck and sleeve openings and sewed it together but who's counting?] Mine was aqua blue with white stripes and I was very proud of it. I still had it when I started teaching several years later - I wonder what became of it? I probably became tired of it and gave it to charity. 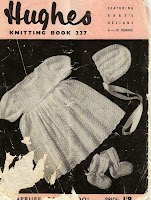 But the vest pattern isn't the oldest pattern in my possession, I borrowed this one from my MIL when I was pregnant with DD and it was bought for one of her children [WM is the eldest] so it is at least 43 years old. 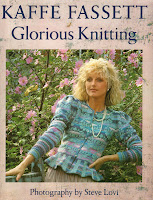 I remember borrowing Kaffe Fassett's "Glorious Colour" from the local library many years ago and being stunned by what I saw. Here was someone who bent the rules [he even knots his yarns!!] - a far cry from my experience of one colour jumpers [except the striped 'Dolly' jumper I had as a teenager in the early seventies]. I had to own this book! I was inspired and even designed and knitted my own gloriously coloured jumper [I'll save that for another post].

In terms of publishing, this is the oldest hardcover book in my collection but it is not the book I've owned the longest.
That honour goes to this book. I bought this about 28 years ago when SIL#1 was pregnant with the first grandchild in the family. I knitted a lemon cardigan but it may have been too girly - it had lace panels as I recall! I certainly never saw nephew #1 in that cardigan. I still use this book occasionally - I knitted a cardigan from it in 2007-2008. This view shows the back cover - I scanned the wrong page!