I'm not sure if I started knitting on plastic needles, metal needles or these old tortoise shell needles. These are what's left of those given to me by my mum and nanna and supplemented by a purchase of one single needle for 10c at Mark Foys in Sydney in the mid-seventies! To remember Mark Foys, you must be really old [like me]! My dad, now 80, worked there for a short while as a teenager! I went there because it was sort-of on my way to college and I'd broken a needle on the train so wanted a replacement. In the knitting department, Mark Foys had a tin of single needles for 10c each! I know tortoiseshell needles can no longer be sold but I bet these four are worth more than 40c!
I don't knit with these - they are precious memorabilia. If I could buy some new, I wouldn't, but these are at least 35 years old and people think differently about killing animals these days. 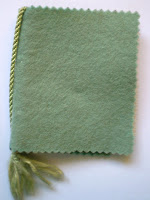 This needle case was made by Nanna for my 14th birthday. It has a matching scissors case and came in an embroidery basket which I still have. 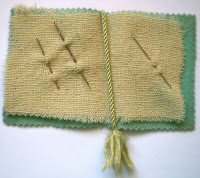 It also came with some really shiny glass headed pins [a luxury item in my home] which some nasty young 'lady' stole when I was foolish enough to take the whole thing to high school to show off!
The largest needle was given to me by my mother when I was in Teachers' College [I finished in 1977]. 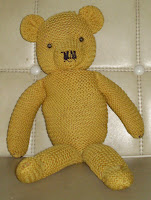 You've seen him before but I'm very fond of Ted so I'll show him again. He arrived from England squashed in an Oxo box sometime before my first birthday. He wasn't a present for my first birthday - my grandparents emigrated from England in time for that - so he's almost as old as I am! In 1986 he was carefully beheaded, re-stuffed and sewn back together for DD. When she leaves home two weeks from tomorrow, he'll be staying here. His usual home is on the back of the lounge in the family room near my knitting corner! 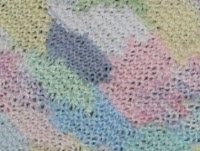 The oldest yarn that was in my collection is actually in this blanket [throw] that lives on the back of my lounge and gets used regularly - it's the darker blue baby yarn given to me by my nanna after finishing a project for Baby Brother [who is now 46]. The oldest yarn in my collection that is not knitted was also given to me by Nanna and is shown in my next listing.

I started these knee length socks on straight needles in the early seventies. They would have been very fashionable then! I did try to finish them during 2007 but decided that 30y.o. pure wool probably wasn't the best choice for socks as a charity project and the foot was so narrow who would be able to wear them? So, after 30+ years on the needles, they will be frogged and turned into something more suitable. I have plenty of 'proper' sock yarn for charity knitting. And I know how to knit on dpns and/or circulars now!! LOL 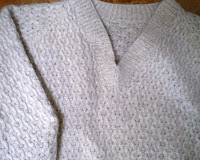 This ratty looking jumper [sweater] was knitted by me in the weeks just after DD's birth. I know I entered it into the Bingara Show a year after her birth but didn't win a prize because of a mistake I hadn't noticed on the inside! It's now worn as a working jumper, when I'm painting, or doing messy jobs, etc. It's too short and has holes in the sleeves but it's still toasty warm.

As a child I was given a kit containing yarn related activities - this weaving loom amongst other things. I began this in my pre-teen years and DD has also worked on it in her younger years. She was frustrated by it even more than I was; I left it at this point because I didn't know how to get the edges straight! I did weaving at teachers' college and still couldn't get the edges right!! Possibly one reason why I'm not a weaver now!!

Anyone care to join me in showing off your old, new, borrowed or blue?
Posted by Lynne at 10:24 am