A new development in dyeing acrylic

This afternoon I took my experiments a little further. What would happen if I heated the dye [minus the yarn] for longer? I tried two samples.

First, I tried an orange mix [3/4 teaspoon in a cup of water] heated for two minutes followed by 30 seconds with the yarn in the dye then left to cool. I did this one in an ice cream container. Result: a reasonable gelato orange and very little crinkle in the yarn [because it was not squashed into a tall, narrow jar].

The second experiment was a blue dye - 1 teaspoon in 1 cup of water. I heated the dye mix for 2 1/2 minutes, followed by 30 seconds with the yarn in - it was really hot, a rolling boil for several minutes after I took it out of the microwave. 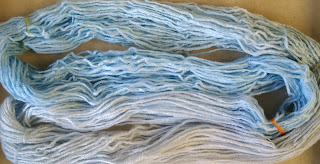 Result a lovely rich sky blue but very crinkled yarn where it collapsed on it itself while cooling. I had put only 1/4 of the skein in the dye; by the time it had cooled there was about 2/3 of the skein in the dye! I'll have to find a way to weight the skein so that it can't collapse into the dye! The blues in the photo are not the same but you can see the extra depth of colour in the top half where the dye was boiled for longer.

Conclusion: the longer I heat the dye - that is, the hotter the dye mix - the better the result in terms of colour.

edited January 6 to add photo
Posted by Lynne at 9:59 pm