No, it’s not the name of a new children's book or television program. The title is a combination of two of my finished quilts: “Violet & Friends” and “Scrappy Churn Dash” (see what a difference punctuation makes! LOL)

Violet and Friends was begun in 2011 when I first joined the Rainbow Scrap Challenge over at SoScrappy blog. It continued in 2012 as I made more blocks. Finally I had enough six-inch crumb blocks to make a quilt top in violet, orange, pink, yellow, teal and green. I shared a picture of the finished top and the backing panel (it’s my signature to use panels on the back of my quilts) in a post in February last year – obviously I can’t rush into finishing! LOL

This year, I seem to have caught some kind of ‘finishing bug’; instead of starting new projects (so easy to do), I’ve been finishing old ones. Perhaps having mum here is a reminder than one day I may not be able to quilt (or knit) – and I wouldn't want DD to inherit lots of unfinished projects. I inherited three knitting projects of mum’s – one I’ve ripped and re-purposed the yarn (into part of one of mum’s blankets); the other two I’m thinking I’ll turn into one blanket instead of the two that were originally intended.

At Easter, I chose a fabric for the backing and hey presto! A week later, Violet and Friends was finished: quilted, bound and labelled! 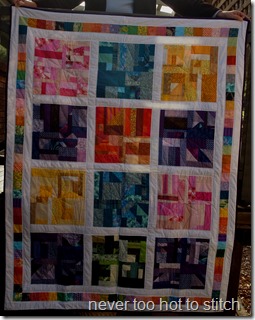 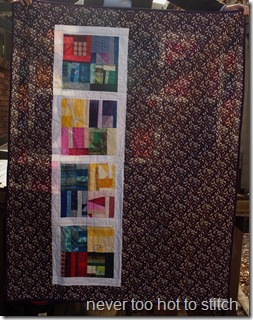 The quilting was inspired by two classes I took on Craftsy: one was “Creative Quilting with your Walking Foot”, tutored by  Jacquie Gering; the other was “Dot to Dot Quilting” with Angela Waters. Angela’s class was basically about FMQ but I took her ideas and meshed them with Jacquie’s ideas and came up with my own walking foot diamonds (I tried FMQ but I can’t do it to my satisfaction – yet!). 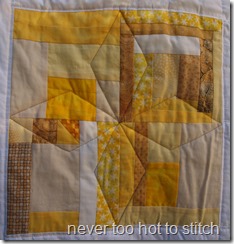 It’s custom quilting and, in my opinion, looks great!

The other project in the title, Scrappy Churn Dash, was also started as a ‘Rainbow Scrap Challenge’ project. In January this year, the colour for the month was blue. I had always wanted to make churn dash blocks so made 4.5” squares for the centres. Then I chose a solid chocolate-brown (most people think it’s black) homespun for the churn dash – brown because it is a shade of orange, the complementary colour of blue, this given some warmth to what could have been a very cold-looking quilt. You can see the story of these blocks here in this post from January 2015. 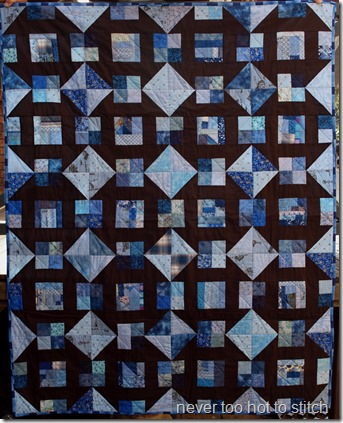 I have several metres of one particular blue fabric so the choice for the backing was pretty easy. I only had to make my signature panel. What I had in mind was to ‘float’ churn dashes over the background but the fabrics I chose don’t stand out enough -- I probably should have gone for light colours rather than darks because this medium tone fabric is obviously darker than I think! 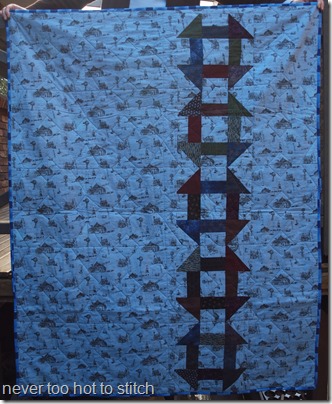 Anyway, the backing came together quickly and the quilting was done using my new quilting signature – diamonds! This involved more custom-quilting that took a very long time considering there are sixteen four inch squares, eighteen half squares, twelve diamonds, fourteen half diamonds, and four quarter diamonds that were all individually quilted. The only parts that aren’t quilted are the churn dash motifs themselves and the squares in the centre of each churn dash – my teacher and the owner of my LQS both agreed there was more than enough quilting on there to hold the layers in place! It is a donation quilt, after all, and my time is better spent making another quilt than in over-quilting! 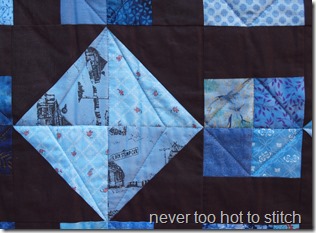 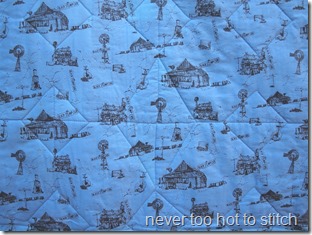 My quilts measure about 52” by 64”, so there is quite a lot of turning of the quilt in the quilting process; just as well I bought a machine that has a largish throat! The downside of custom quilting, apart from having to turn the quilt a lot, is all the ends that have to be sewn in when the quilting’s done!
And before I go, I just have to show you my sunglasses case that I also finished in March 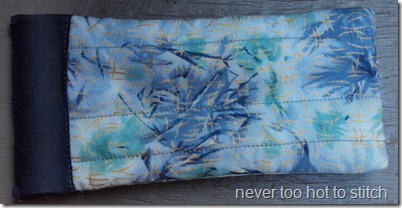 and my zipper pouch with box corners that I finished in April. 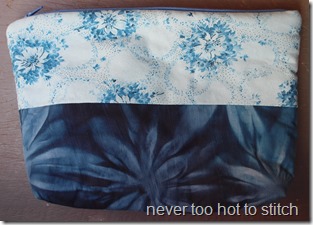 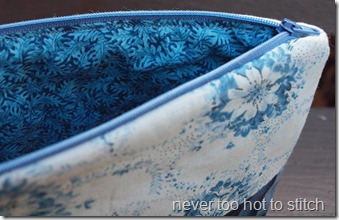 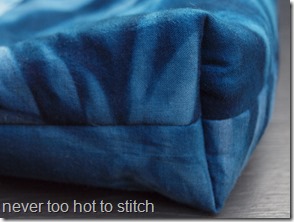 Putting a zipper in is not as difficult as I thought and I look forward to trying some more – I watched several tutorials and think I’ll try this one from Jenny Doan of Missouri Star Quilting Company next.

The sunglasses pouch was made from a tutorial by Gourmet Quilter. I’m not entirely happy with mine but I can see ways of improving on the next one!

After Scrappy Churn Dash was done, I took a few week’s break from quilting and patchwork to work on some family history but now I’m back in to the stitching groove and will be back soon to show you my works in progress. Look for that post next week; Thursday at the latest as I link up with WIP Wednesday over at Freshly Pieced blog.

Until then, may your stitching bring you much joy.
Posted by Lynne at 2:41 pm