It’s a new year in the Rainbow Scrap Challenge on SoScrappy blog. This linky party started in 2012. I was late joining in back then – being a newbie quilter I didn’t have many scraps but later in the year I found I had acquired enough to get started. I was a regular participant in 2013 but I didn’t join in much last year (twice, I think). This year I’m ready and raring to go! All those hours in November spent pressing, cutting, sorting and storing scraps has set me up to sew, sew, sew.

Yesterday was my first sewing day for 2015 and the first time I’d sat at my sewing machine for over three weeks. I had plans to make two 4.5” crumb blocks for RSC but, you know how it is, I was having so much fun and I had so many blue crumbs and other scraps that I ended up with twenty-two 4.5” blocks! 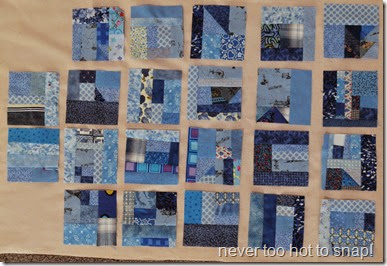 I have plans for these crumb blocks to become the centre of modified 12” Churn Dash blocks. You’ll have to come back later this month to see my modifications! ;-)

At the rate I’m going, I’ll have enough blocks finished by the end of the month to create another top/flimsy.

Flimsies becoming quilts has to be my focus over the next couple of months. January is summer break in Australia so most of my activities are in recess; therefore I will be at home most days throughout the month. Our quilting group has the "Airing of the Quilts” in April and I have promised six quilts, only two of which are completely finished so I’d better get cracking. The biggest setback for me is not having anywhere to baste the quilts – I’m too out of condition to crawl around on the floor (I always end up pinning to the carpet anyway!) and we have a good timber dining table. I don’t think my normally easy-going WM will be happy if I start sticking pins into it! I want to buy a trestle table but in the meantime I have to take my layers to my LQS and baste on the big table in the classroom – when there are no classes on! During January they are conducting one day workshops so I will have to work around them.

During December, I had been pondering how to see exactly what projects I have in progress and where I’m up to with each one. I have all of them listed on my Errands app but that doesn’t show me where each project is up to (and I can’t see all of them at once because there are too many to fit on the screen)!

The answer was simple – an Excel spreadsheet!

So far I have only created one for my sewing projects – Ravelry looks after my knitting projects for me.

I have recreated part of my spreadsheet here (in case you’re curious). Windows Writer didn’t cut and paste effectively!

The other columns are shown here but none of the five projects shown has reached this stage yet!
There are, of course, more projects than the five shown here. Only projects in progress are on this spreadsheet; I have also created a worksheet for projects to come!

Anyway, what you can’t see on this spreadsheet is project-in-progress #15;  that’s the “very happy” part of this post. It’s scrappy and it makes me very happy!

The top of Jacob’s Ladder Goes Barn Raising is finished; and without much reverse-sewing – the worst was 48” where I joined the wrong sides of the rows! 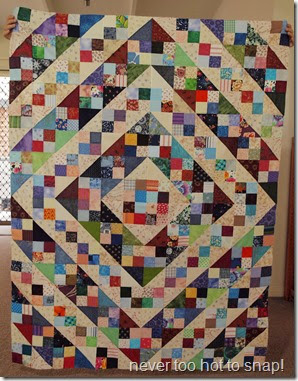 But wait! there’s more! (Did you have television commercials/advertising with that phrase?)

The backing is also done – and look! Five Jacob’s Ladder blocks put together correctly! I don’t usually use a solid for backing but this is the only coordinating fabric I had in a quantity large enough to make a backing. Woo-hoo! I’m a happy patch-worker! I linked this project-in-progress with Sharon’s Let’s Book It challenge in November and am adding it, belatedly, to the December link-up on Vroomans Quilts. I’m hoping it will appear again at the end of January in a more advanced state! 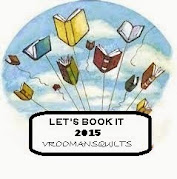 Both the front and the back of Jacob’s Ladder Goes Barn Raising were finished by 12 December but my original photos, taken on my iPad, looked fine on that device but on my PC they looked terrible so I withdrew the post (my apologies to those who had the post come up in their reader and then couldn’t find it). I had to fold it and put it away when DD and grandsons arrived so new photos weren’t taken until today. Thanks once again, WM [never too hot to snap!].

Are you joining the Rainbow Scrap Challenge or the Let’s Book It challenge this month?
Posted by Lynne at 9:26 am