Over the last couple of years, maybe longer, WM has been bringing home yarn as an elderly friend slowly de-clutters her home. Knowing that I have no more storage space in the wardrobe where I store yarn, he has been quietly storing it in the garage.

On Boxing Day (26 December, a holiday here in Australia), I wondered whether there was any dark coloured 8ply (DK) acrylic in the bags to add to my current project (rather than buying more yarn unnecessarily). WM accompanied me to the garage and, to my surprise, began hauling out bags and boxes from all over the place. I had no idea that there were so many!

Just as well my car was out of the garage. The space was quickly filled with two cartons, six large garbage (trash) bags and several smaller bags.

Two of the bags contained fleece (one straight off the sheep's back with bits of vegetation included!); these were obviously intended for DD because I don't spin.

Yesterday, while WM was at work, I hauled those bags and boxes into the living room and started going through them. The first thing I found was a beautifully knitted and obviously much loved blanket that had been repaired over the years but was now beyond repair. The far corner in the photo is just about hanging off! The blanket was in a bag labelled "Mrs Walker's rug". I have no idea who Mrs Walker was but I love the intricately knitted blocks and the colourful ruffled edging makes me smile! I have ear-marked this one for the local animal shelter -- I'm sure the dogs won't mind the holes! 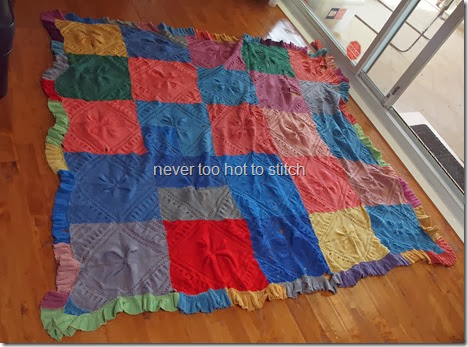 The process of emptying each bag took several hours, deciding what was worth keeping, what could be given to the charity shop (thrift store) and what should just be thrown away (very little as it happens; I am a child of a "Depression" baby and we learnt to recycle, reuse or make do long before it was fashionable. I am also a hoarder, and believe that most things will be useful "one day"!) As I went, I added the yarns I was stashing into my Ravelry account.

During the sorting, I found two partially-made blankets. The "Christmas" one (thus named because of the colours) was crocheted and was already very heavy. I will rip it out and knit the yarn into something else. The second photo is closer to the real colours but the green is even more vibrant! 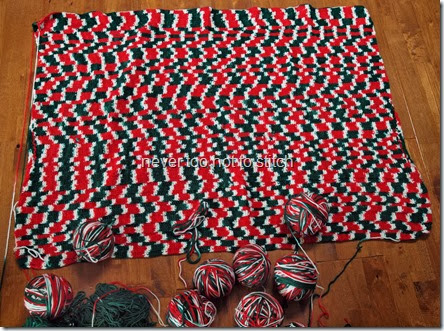 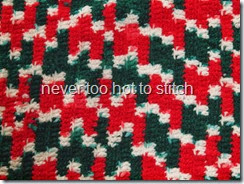 The one-day-I’ll-be-a-tartan rug I will discuss with my mother-in-law (she has made at least two of these tartan blankets in the past) and I’ll probably finish it. Seems a shame to waste all that hard work, although I could just give it to the animal shelter (it’s acrylic) after I sew all the ends in! 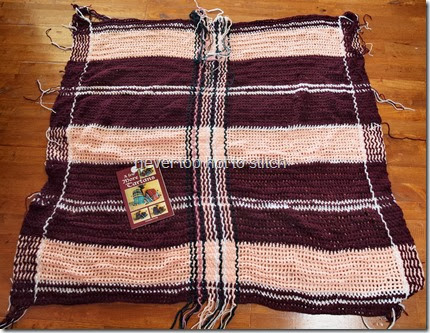 I also found two bags of very small knitted pieces, perhaps they were tension squares (gauge swatches). I think I’ll join these to make a blanket for the animal adoption agency. If I rip them all out, I ‘d only have to re-knit them into something else! 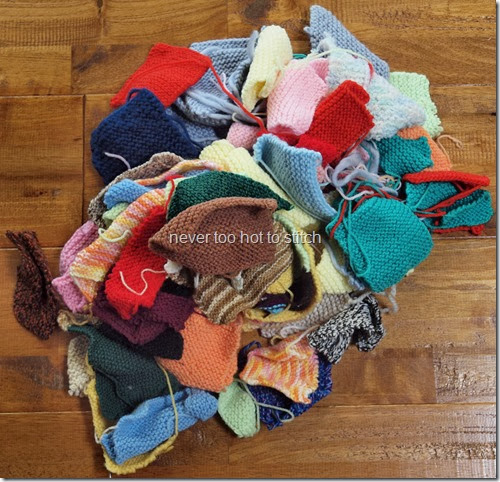 I found the pieces of a baby's cardigan, which I will finish if I can match the yarn to do the button bands.

I found several balls of wool made in Australia that weighed “one ounce”. That may not be too remarkable if you're not an Aussie knitter but the wool industry which, for many years, was the most important primary industry in Australia (we grew up hearing that "Australia rode on the sheep's back") has all but gone -- most commercially available yarn may be grown here but it is processed overseas. Additionally, the Australian wool industry changed over to the metric system in 1971. That makes those balls of yarn at least 42 years old!

The six balls of mohair are showing their age -- hard as steel wool. I'm thinking that a good soak in hair conditioner will restore their softness; if not, off to the charity shop they go! Speaking of mohair, I also found an acrylic/mohair blend that was being reclaimed from a commercially knitted garment, made in Indonesia! It's a pretty coloured yarn so I finished the ripping out (a slow process with mohair).

I found some good quality pre-1971 variegated Paton's Totem yarn. Most of it is knitted up into what would have been, in my opinion, a very ugly garment. I have ripped it all out and will think of another use for it. No, the photo is not out of focus – the yarn is just hard on the eyes! Way too much of that brown! 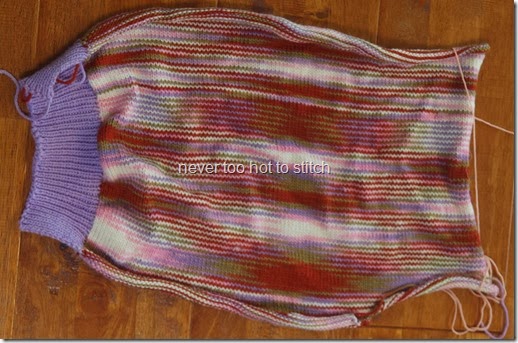 There were a few kilos, that's several pounds to my non-metric friends, of very brightly-coloured yarn which was too thick and too harsh to knit with. I'm assuming our dear friend had done some rug making in the past! That is all going to the charity shop, along with a bag of odds and ends and several balls of eyelash yarn -- life's too short and I have too much yarn to knit things I really can't stand! 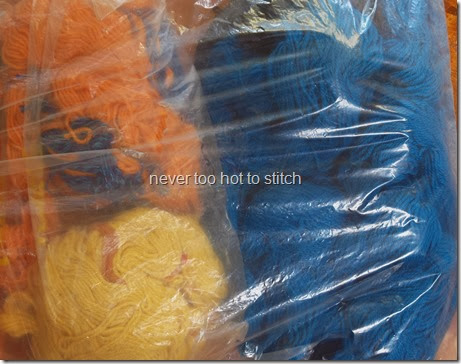 All the 8ply (DK) acrylic (it just keeps coming) has been put in the box I reserve for that yarn. Yarn taht was too good to throw away or give away but which I cant figure out what to do with has been put in one bag labelled “miscellaneous – to be sorted”. I think most of it is wool or wool blends but, since there is only one 50g ball (or less) of each type/colour, I have put it aside for now.
All the other yarn I plan to keep has been packaged up and labelled. I have never done this before but it seems like a good idea! I am going to put all the bags in the drawer under the spare bed (where we used to keep spare clothes for the Grandsons when they lived nearby and visited often). It seems to me that, instead of knitting big projects like blankets (I started another one on Christmas Eve), I should knit lots of smaller projects and use up some of this yarn. It would be more useful keeping someone warm this winter (June to August in Australia) than taking up space in our house! 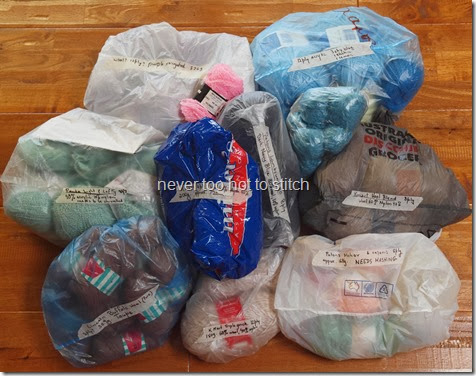 So, I'm calling these "grab bags"* and I'm going to make it both a game and a challenge for myself. Either WM or I will open the drawer, grab the first bag that comes to hand, and I will knit the contents of that bag into something useful until the yarn is used up. That shouldn't take too long considering the small amounts of most of each type of yarn.Then I will repeat the process until all the "grab bags" are done! If I enjoy the challenge, I will go through the boxes of donated yarn and old UFOs hiding in the bottom of the wardrobe, rip out where necessary, and make some more "grab bags"!

*This idea was partially inspired by Carol over at Fun Threads who makes quilts from challenge bags which I think are provided by her guild. It is also reminiscent of the sock challenge that was popular on the "knitternet" a few years ago where knitters put sock yarn and an appropriate pattern in bags, one for each month of the year, and randomly pulled out a bag each month.

Now what should I do with the blanket that’s in progress…?