I had hoped to have my Earth and Sky quilt completely finished for the “Airing” last weekend but it was not to be.

On Monday I added the inner border to the flimsy. It’s in “sand” coloured homespun so there’s nothing really to show.

I cut 4.25” strips – I didn’t have enough for 4.5 which would have been my original choice but 4.25 was enough. I attached the top and bottom border. I pinned the side border…
…and it was two inches short!

How could this be? I has measured and calculated and measured again before I cut.

But, of course, I had measure the width and length of the flimsy as it was (that is, including inner border). I didn’t calculate the extra 4” of length that the top and bottom outer borders added!

You know, I think cornerstone blocks were invented for just such a reason!

So it was time to go back to the group’s stash to find the right fabric for the job. 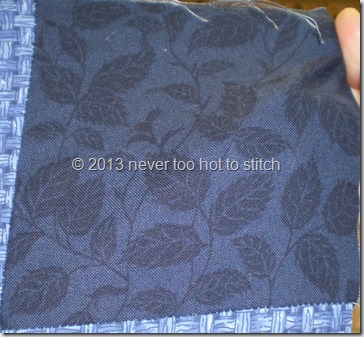 I cut the cornerstones and added one to each end of the border.

Then I realised that I needed to take off the excess border fabric so the cornerstone would fall in exactly the right place!

Things are often not as easy as they first appear but at last ….

…the Earth and Sky flimsy is done! 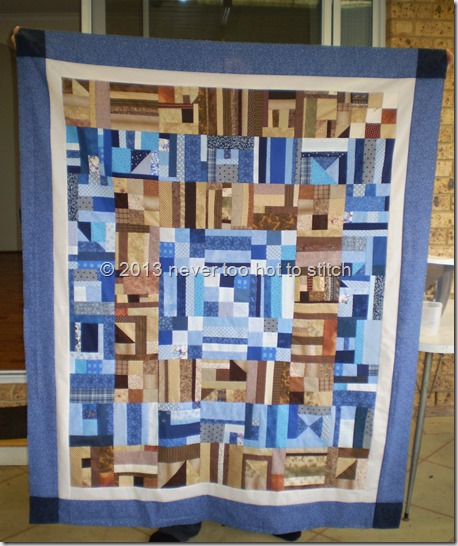 Of course, every flimsy needs a backing before it can become a quilt.

The fabric I have chosen is striped and, naturally, isn’t wide enough. I don’t want to match stripes so I had lunch and thought about how to widen that fabric with a panel.

This is what I came up with. 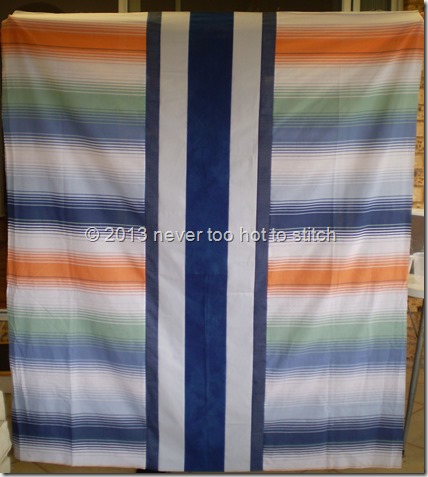 I know the photo looks out of focus but it isn’t; it’s just the way the camera captures those stripes. 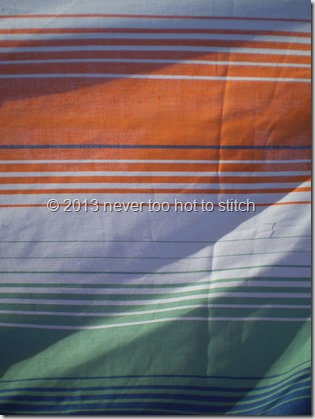 The thin blue stripe going up both sides of the centre panel is a blue on blue random line check.

On Monday, before class, I will take advantage of the big table in the classroom to get this quilt basted!

My Saturday was swallowed up in cleaning as well as getting a quote from a painter and showing a property manager through DD’s former home. Sunday will involve church, a fellowship lunch and probably more cleaning in the afternoon.

How’s your weekend shaping up?
Posted by Lynne at 10:05 am