Here we are, twelve days into January and things have not exactly been going to plan.

I decided to run my Linky party on the first Thursday of the month which was 3 January. I thought I'd have plenty of time to organise it because mum, who arrived on 27 December, was going home on 2 January, and my sister and nephew weren't arriving until 4 January. That gave me all day on 3 January to write the post and set up the Linky!

But....
We visited Calmsley Hill City Farm on Sunday 30 December. Mum was helping WM carry the picnic lunch up from the car and therefore had her arms full and couldn’t see the ground immediately beneath her feet. She fell heavily on some uneven paving and twisted her ankle. We spent most of the afternoon in the emergency room after an ambulance took her from the farm.

Mum's okay now but she ended up staying here until 5 January when the doctor said she would be fit to travel. As you know, I managed to get my post written so everything worked out okay.

While my guests were here, I decided it was time to finish the Sideways Striped Baby Jumper that I had started in November 2011. All it needed was a collar knitted on and the seams sewn up -- one evening's work (or so I thought)!

Knitting the collar wasn't as easy as I thought and after four attempts over two days to get the collar right, I gave up! In the end I frogged it because the head hole seemed too small to go over a baby's head easily. No worries, frogging is a "finish" for that project and the yarn will some day become a cardigan knitted sideways to retain that vertical striping that attracted me to the pattern in the first place.

One of my top priorities for this month was to finish the Hearts and Squares quilt. I had finished all the blocks and just needed to trim the 6.5" four-patch blocks down to the same size as the 6" heart blocks. I hadn't been in my sewing room since well before Christmas but in my head the quilt top looked great!

It took a long time to settle on a layout for the four-patch blocks. I knew the finished layout had to be 9x7, because there is a particular size I have to make for our community quilting group (roughly 56" x 64"). I had a large number of blue blocks, and almost the same number of brown blocks, and a few others in green, red, pink and yellow. I finally came up with a layout that I was happy with and started to add the heart blocks. 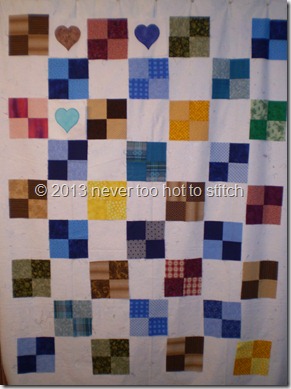 The layout was okay but the squares seemed too “hard” for the hearts which cry out for a “softer setting”. It occurred to me that the squares made an attractive layout for a "man quilt" (we have to work harder to make those because of all the floral scraps we are given). But that's okay, I have plenty of fabric (that belongs to Caring Hearts Community Quilters) and I'm not adverse to making two quilts.

The question was which quilt to make first because it's unlikely I'll get two finished this month (given the goals I've set for myself and the time remaining). I settled on the four-patch blocks; after all, the layout is already on my design wall.

Then the question became: what blocks to make to enhance the four patch blocks? I don't have enough of any one fabric to use plain 6.5" squares nor do I have the quilting skills to make a 6" block look interesting!

I settled on square on square blocks, the central square being the same size as one quarter of the four patch (that is three inches finished) with a light neutral border around it to make it up to the correct size.You might not have noticed, but I've made further changes to the layout of the four patch blocks.

So despite the fact that yesterday was forecast to be 41°C (106°F), I took myself to the garage to find some suitable fabric and then to my sewing room to re-introduce myself to my rotary cutter and sewing machine! I think it actually got to 37°C (98.6°F) but the air-conditioned kept things at a comfortable 24°C (75°F). I got slightly more than half the blocks made, pressed and trimmed.

I think it’s shaping up to be a good unisex quilt, don't you?

How are your plans for January shaping up?