During the second half of this year, I decided to focus my attention on a small number of projects (maximum 7) and not allow myself to be distracted by my UFOs or enticing new projects.

This is my progress during December which shows that I really do work best when I have a short list of projects to focus on!
I knew there was no way that I would have that cardigan or quilt finished in December; as long as I am making progress, I'm happy.

Here's the final photo of the Purple Dropped Stitch Scarf  -- taken before it was washed and dried to soften it up. 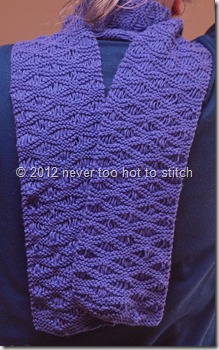 I have come to realise that the longer I leave a project the less likely it is to get finished -- which I guess is probably true for everyone!

During 2012, I finished a total of 60 projects; three projects were frogged, one project never got started, eight remain works in progress and ten have slipped into being UFOs (I think six months without any action is long enough to call them unfinished objects)!


That's twenty two projects being carried into the New Year! And twelve of those were started before 2012!

It's not a long list but, for the sake of my sanity, 2013 needs to be “The Year of the Finished Project”!