I have not heard from DD since Younger Grandson came home from hospital so I can only assume that "no news is good news". I half-expected them to turn up on my doorstep on Tuesday morning but they didn't. DD obviously felt capable of coping on her own, which is a good thing.

You may wonder why I haven't called DD myself but there is a good reason: with two little ones in the house there is a good chance that one of them will be asleep and I don't want the phone to wake them.

They are usually here on Fridays so I can only assume they will be here tomorrow as usual.

I have made good use of the "alone" time over the past two days although, for all the hours I have spent in my sewing room, there doesn't appear to be much to show. However, I have been so engrossed in what I have been doing that I have not taken any photos!

Because it doesn't look like much after hours in the sewing room, I am keeping a "craft diary" to show me what I actually achieve each day!

I have started to tidy things up by putting things away and moving some stuff out of here -- a quick glance might show that not much has changed but progress has been made and if I do a little bit each day, rather than trying to tackle it all at once, I will get there in the end.

I have put all the sashing strips between each of the blocks for the Scrappy Strings II quilt to make seven rows and today I plan to cut the rest of the sashing and attach it. I will then need to piece a backing for the quilt: it is just a little too big for the two metres of fabric we bought to fit! *sigh*

But the most progress that has been made around here in the past couple of days is to the Hunter's Cabin quilt. (This is how it looked the last time you saw it on the design wall). 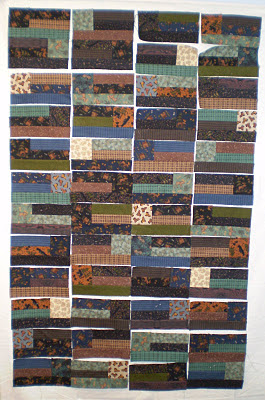 I have been avoiding it because it is flannel and has been giving me a lot of grief. On Tuesday, having finished making the rows for Scrappy Strings II, I decided, on the spur of the moment, to just "suck it up" and get on with it. Finishing that quilt was not on my "to do" list at all but you know what they say about the best laid plans ...

Anyway, I finished piecing those blocks, then joined the first four blocks into pairs, then a group of four. It quickly became obvious to me that I needed a pressing plan - otherwise all those joining seams would get tricky!

So I drew up a pressing plan, taped it to the bookshelf next to the ironing board and marked off each block, pair, four-patch and section as I did them! I finished piecing that quilt yesterday morning and, while I am not particularly feeling the love, I am pleased to see a completed top!

So why stop there? I set up my cutting board on the lounge (living) room floor, covered it in a plastic cloth (which I always do for blocking to keep the moisture out of the cardboard) and proceeded to pin baste! All well and good until I tried to pick up the sandwich - I had pinned to the plastic cloth! I had to start all over again!

I also learnt that masking tape is no good for me - it is better to closely pin the backing fabric to the cutting board (without the plastic cloth); masking tape doesn't hold things taut enough and frays the edges of the fabric when it's ripped off!

Anyway, after a couple of hours crawling around on a carpeted concrete floor, I arose stiff and sore, with a completed sandwich which is now rolled ready to be quilted. All I have to do is change the foot on the sewing machine, decide what colour thread to use, wind a few bobbins and I'm good to go!

After all that, I spent a few hours in front of the television with my knitting. I have only one ball of yarn left to finish the Baby Blanket for William, so that should be done by the weekend. Now if only Sydney's weather would "summer up" so I can block it!
Posted by Lynne at 11:12 am