Inspired by Janet of Caribou Crossing Chronicles, I started thinking about this place where I live.

If I say "I live in Australia", you may get a very different picture to what I see every day.

Metropolitan Sydney is made up of more than 600 suburbs in more than 40 local government areas; many of them cities in their own right because they have populations in excess of 150,000.

We live in the furthest west of those local government areas, close to the foothills of the Blue Mountains and the beautiful Nepean River. But, though they are only a few kilometres from my home, I cannot see anything but suburbia!

So this is the view I look at most often: 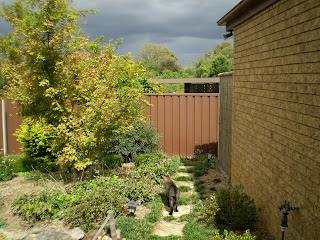 The sky changes, the colours in the plants and trees change, the cat comes and goes, but the view remains the same.

For the fact is, like most Sydneysiders, we live in suburbia. We have a neighbour to our right, a neighbour to our left, and two neighbours behind us because we have a short, wide block of about 720 square metres (7750 square feet).
WM and I live in low density housing; for us that means a single house on a single lot of land. Other parts of Sydney have medium density housing (townhouses, villas and small blocks of apartments) and other areas have high density housing -- DD and SIL used to live in a block of that had over 100 units (apartments) and there are many bigger blocks than that around commercial centres and transport hubs.


The view I showed you before is the view I see if I sit in my usual spot in the family room. If I turn my head now and look out the window, I will see some tree begonias (about 3m - 10 feet - high) leaning against the window because of the wind and heavy rain we've had over the past few weeks. (The photo shows you what they looked like before the rain and what a colourbond fence looks like.) 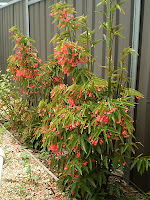 1.2 metres (4 feet) from my window is a 1.8m (6 feet) colourbond fence and perhaps 0.6 metres (2 feet) on the other side of that is a colourbond garage. Because the street in which we live is on the side of a hill, their land is higher than ours, so from where I sit (halfway across the room) I can only see about 30cm (12 inches) of sky the width of the window on account of that garage; sometimes I need the light on in here all day to get enough light to cut fabric accurately! My sewing table is under the window but the only place for my cutting table is as far from the window as it's possible to get and still be in the room (which used to be DD's bedroom to give you some idea of size).
I can't say I love living in suburbia, but it is "normal"; I have done so all my life! But I love the fact that if I travel for five minutes in a northerly direction I am out in the rural area yet I can be "in the centre of town" in ten minutes!
Perhaps I've inspired your to write a post about your place. I hope so, I look forward to reading them!
Posted by Lynne at 1:40 pm