DD and I have been practising using the quilting frame with two layers of calico. Rather than "waste" more calico, we continued on the calico we had already used for practice! Here is a sample of my freehand stippling in red thread (the purple is the old practice) working from right to left.

Here is a sample of DD's freehand work - pretty good, don't you think? 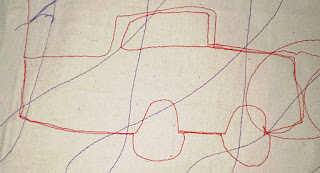 Thanks to a hint from Cindy of Tops to Treasures, I bought three metres of beautiful blue polar fleece to use instead of batting but it is so pretty we can't bring ourselves to use it! Being the end of spring, the Big Box Craft Store has very little polar fleece in stock - they need the space for summer fabrics.


So, DD and I decided what we needed to do was to make a quick and easy quilt top, then get some batting and practice on a "real"quilt.
To that end, we began making string blocks. Each is 9 3/4 inches square, and made up of six or seven strips. Here are the first five (of 24) that we have completed. Since I took these photos, four more blocks have been finished. 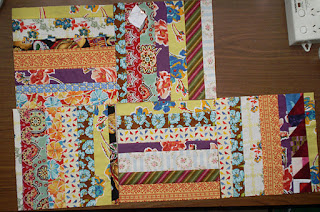 I spent several hours, cutting and pressing strips and matching them into pairs. This pile doesn't look like much but it consists of 80 pairs of matched strings, plus some strings that have been sewn into pairs and are now pairs waiting to be joined to pairs. 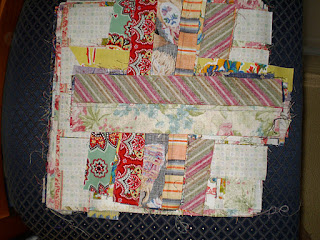 This pile was all sewn togehter on Tuesday. DD and I worked together, I cut and press, and DD chain pieced - the production line keeps us both happy and is quick and efficient.

Hopefully it won't be long before we have a quilt top to work on!
(And hopefully by the time you read this I am on my way home from mum's).
Posted by Lynne at 11:05 am