Thank you to all who sent good wishes for my recovery from sinusitis. I'm now on my second course of antibiotics and am feeling much better than I was but am still a little "stuffy".
Today I tried to do a little sewing for the first time in three weeks. Perhaps I shouldn't have tried to piece this block.

I couldn't sew a straight seam. Not even for two and half inches. Everything was slipping and sliding all over the place (Yes, it's quilting cotton). The square in the centre of the block was not square (although it was cut perfectly square). It had curved edges and a corner that was definitely not square. The white strips were more curved than straight. 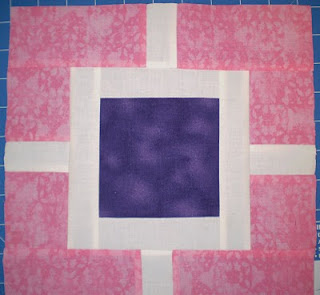 I think part of the problem was not knowing which way to press the seams to prepare properly for the next step. I know I should press towards the dark fabrics, but my seams didn't want to lie that way.

Even when I tried to square the block with a rotary cutter, it looked more like a kindergarten child had attacked it with a pair of scissors. I gave up in the end and really felt like giving up sewing for good!

Fortunately, I have enough fabric left to cut some more pieces and try again!

I couldn't even get any decent photos for you! Taken with a flash at night, they were still out of focus! What's wrong with me?

Do you ever have days like that?
Posted by Lynne at 10:08 pm