I was tired of the harsh lustrous acrylic I had been using for children's jumpers [sweaters]. Australian Country Spinners market it as baby yarn - eek! It won't be knitted by me for any of my grandchildren. It looks so pretty but it's so harsh to knit with because of that strand of lustrous acrylic. So, what better place to put harsh yarn than on the head but away from the skin. This pretty-to-look-at yarn cried out to be a beret. I love the look of berets but I wouldn't think they are very practical as a head-warmer! Nevertheless, I couldn't resist so a beret it had to be! It's the right size around my head but the top is a little large. It's probably not really appropriate for charity knitting either but I'm sure it will fit someone. I love the look of berets but I don't have the confidence to wear a hat as an accessory. I think it takes a certain kind of personality to pull it off and I'm not one of them - I'd be utterly self-conscious! 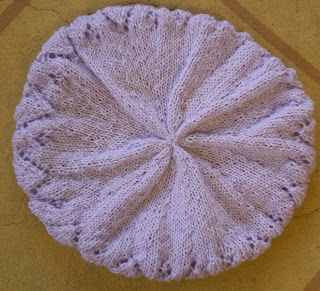 Somehow I have missed showing photos of two beanies I knitted in winter: the first has a self developed slip stitch pattern and the second is the end [hurrah] of that yarn I bought on special and never want to knit with again! Fortunately, it's no longer made so I won't be tempted to buy it because it's cheap!! 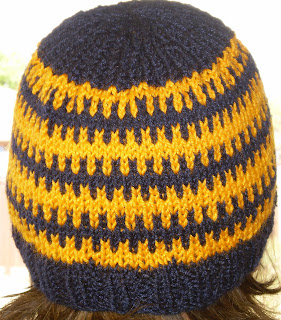 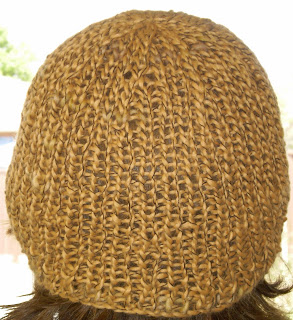 There were some more beanies knitted in August. All of them were knitted from Moda Vera "Spell" which is a acrylic/wool [75%/25%] blend. There were four of them but one photo is sufficient. One had a moss [seed] stitch band, the others are rib - one K1P1, the other two K2P2. 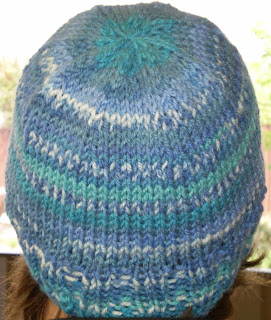 I liked these beanies but I felt the yarn wasn't shown to advantage so, in September, I cast on three times for an entrelac beanie because I thought the colours of the yarn would show up better. I was right but the first beanie was way too big - enormous in fact, and the second I decreased two quickly so that it was the right diameter but too short in the cap! The third one still didn't work so they were all frogged and a different design created. This one involved eight triangular shaped panels. Each panel was knitted then stitches picked up along the edges and the next triangle begun [an entrelac technique modified]. 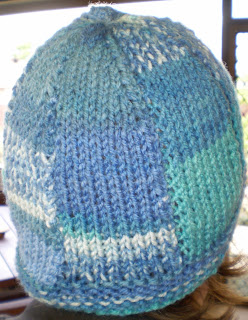 I like the twisted stitches between each triangular shaped panel. There is another similar beanie on the needles having its spring vacation in my drawer at work becasue I forogot my kntting in my eagerness to get out of there [and start my two week break]. 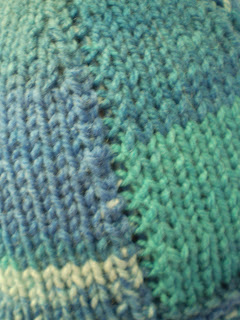