How not to knit a poncho 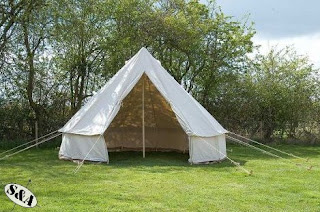 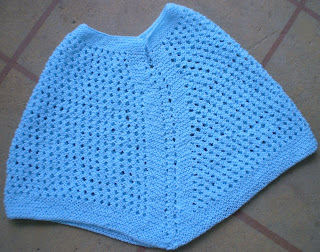 The yarn is Panda's Baby Lustre 8ply which I picked up in the bargain bin at Wangaratta last year for the enormous sum of $12 a kilo [or $0.60 per 50g ball]. It's certainly not a soft yarn and I wouldn't use it for anything a baby was going to wear close to its skin but for a little girl's poncho that bit of sparkle is 'just right', even if the centre line isn't; I'm hoping it won't look so bad once it's on a 3D person!!

It's completely knitted in garter stitch [despite those seemingly interminable rounds of purl - especially in the "bell tent poncho"]; only one row in four has *yo, K2 tog* to make the holes. The pattern is mine, designed on the needles from a vague idea in my mind's eye. Sometimes that works, sometimes it doesn't! LOL

*picture of the bell tent from surplusandadventure.com

Apologies to everyone whose feed readers told them I had published several times - I wish I saw all my mistakes before I hit "publish post"!
Posted by Lynne at 6:38 pm

Labels: "Winter of Textured Knitting", charity knitting, knitting in the round, poncho