Here we are at the end of the first full month of the Winter of Textured Knits and the kntting continues apace. Apart from the Tomten jacket which I showed you last week, I have knitted a few pairs of fingerless mitts and I have enough beanies here to "sink a battle ship" [as my mum would say].

So first, the mitts:

Three pairs of fingerless mitts knitted in a K2 P2 rib pattern I modified from a book called Handknits to Wrap and Adorn [Cleckheaton]. There are only two mitts shown; the third pair were navy and the same as the first pair only smaller [being knitted in thinner yarn and with less rows at the wrist]. 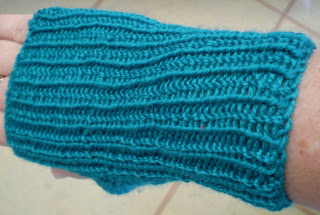 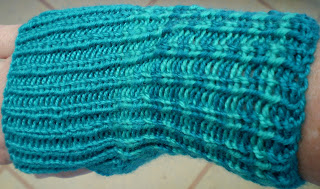 Plus one pair knitted in ribbing and moss [seed] stitch. 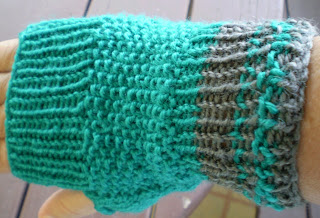 Stripes in ribbing never look good in photos; they look a little better in real-life!

And so, on to the beanies:

Six more from the Moda Vera "Caravella" - this yarn knits up quickly but I'm glad I've used it all up; I don't like the feel of it very much - it's a harsh yarn although it knits into soft warm beanies on relatively big [6mm] needles [US size 10] 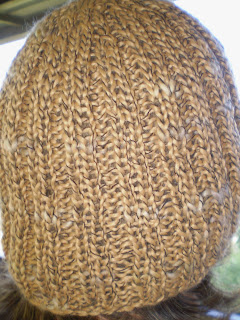 Beanies look better on a model but I've been home alone - it's been holiday [vacation] time for me and WM has been at work so the remainder of the photos are model-less; sorry!

Here is an over-sized beanie in a variation of 'Aboriginal colours' - I was using up odd balls of yarn. This is DD's favourite of all my current beanies but, of course, it's too big for her! 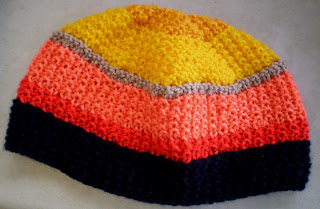 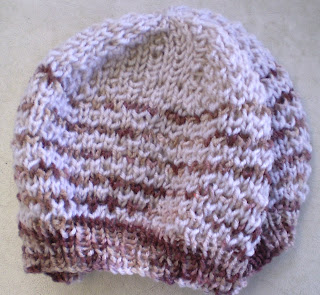 This blue one is my favourite. It's knitted from the same yarn as the "Sad Bumble Bee" Tomten I showed last week. 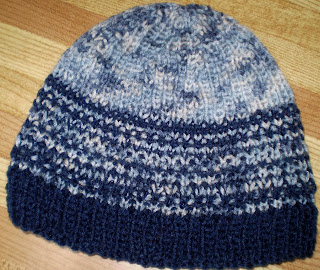 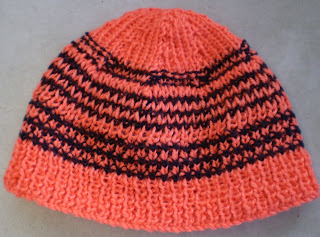 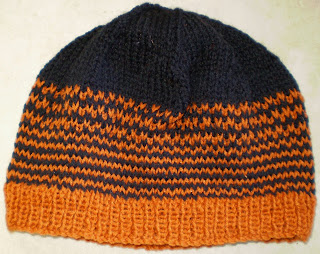 Finally, two patterned beanies: the first is my own design - it didn't come out anything like I intended but it's rather nice anyway. 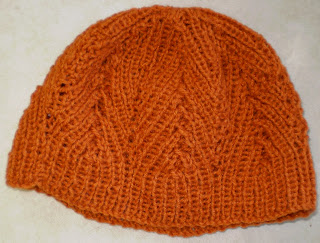 The second is the old lace standby - Feather and Fan - the yarn was such a pretty colour that I couldn't resist using a lacy pattern: lace gives texture too! 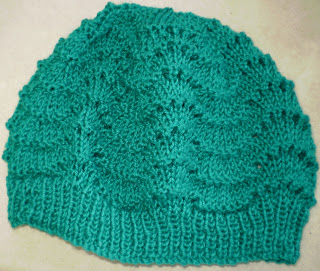 This one reminds me of the swimming caps of the 1960s - tee hee!

All of these beanies and mitts will be going to Australian Inland Ministries which is one of this month's projects over at Knit4Charities.

I've given up putting beanies and mitts on my progress bars - generally I finish them in one or two days so I spend more time fiddling with my progress bars than is really necessary! If you really want to know how many beanies/mitts I've knitted, scroll down the sidebar to "At the Terminus 2009".
Posted by Lynne at 8:25 am