Yesterday, I decided I was going to watch the tennis before it was all over. I got myself an easy knitting task and settled in front of the television. Good choice - I saw Bernard Tomic, a 16yo Australian, become the youngest man ever to win at the Australian Open! What a thrilling match it was - especially the third set!

I also watched Jelena Dokic [an Australian] struggle to win her game, the first set played by another Aussie Casey Dellaqua [then we went for our daily walk] and finally Roger Federer playing against a worthy opponent, Andreas Seppi, until after midnight.

I did, however, finish knitting a pair of fingerless mitts - only they weren't a pair because the yarn was irregular in thickness so they knitted up differently. They have been frogged and the yarn rewound to be used for non-paired items! DD spliced the yarn together from odds and ends we bought at Bendigo Woollen Mill, I don't think she realised at the time that she was putting different thicknesses together. You can see the yarn in a ball here. We hand-dyed the yarn and not only is it different thicknesses, it is different blends - we know that because it took up the colour differently! 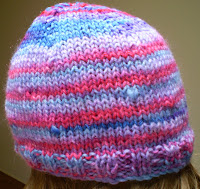 Here is the beanie I knitted yesterday with the same yarn [the light colours are the thinner - DK yarn; the darker colours near the crown are the thicker yarn]. The large stitches you can see at random are where the splicing has felted - it makes for a unique look!! LOL

And... I cast on the first sock from the Online Supersocke yarn I frogged in December. I'm knitting a modified version of Flame Wave from Favourite Socks.

Today, another Australian, Lleyton Hewitt, a former World #1, will try to regain some of his former glory. He enters this tournament unseeded and has a tough draw against 2007 finalist, Fernando Gonzales.

Wish me luck in getting away from the TV today!
Posted by Lynne at 8:40 am