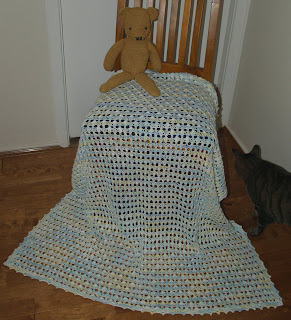 Here is the baby blanket I finished knitting some months ago. The photo is a bit dark but true to colour. Tomodachi [a.k.a. Tom] is snooping around in the right of the picture. I sewed in the ends of the blanket on 28th December during my avoidance-of-lace-but-finishing-other-things period. It was blocked last week and photos were finally taken today - mostly to distract readers from the boringness of that "other project"! Here's another photo taken by WM in the role of photographer with my 51yr old bear [Ted] and Tomodachi assisting! 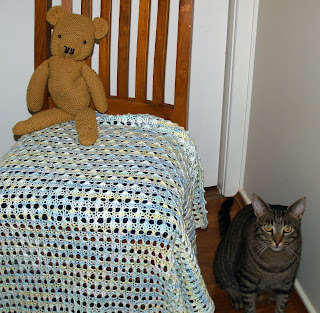 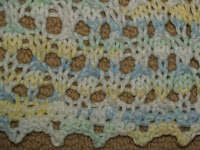 Although I didn't strictly knit this during the Long Lacy Summer, I did finish it during that time. It qualifies as lace [having both yo's and K2tog.] so this blanket is my first contribution to LLS.

The pattern is Snow Berries Blanket from "Easy Afghans for Knitters".

I knitted mine in Cleckheaton Fiddle De Dee [100% cotton] on 4.5mm [US size 7] needles. I used the 500g I bought on special at Australian Country Spinners' Mill Shop when I was in Wangaratta in July. This photo shows how much of the ten balls I have left - from the last ball which was not enough to do another circuit of the blanket and the leftovers of two other balls.

It's a pity this yarn is discontinued - it's lovely and soft, and knits up quickly.

I made it for my next-door neighbour who is expecting her first child in February. I love it so much I might keep it for my first grand-child and knit something else for the neighbour. Hopefully, NDN will have a girl because this is such a boy's blanket! [Just kidding - I really want to keep it!] DD says I'm rushing things a bit - they're not even married yet; besides I knitted it for NDN so I should give it to her. I don't agree. I knitted it - I can choose who the recipient should be, can't I?

For those of you still following that "other project" - I have completed 10 repeats; that's a quarter of the centre panel!
Posted by Lynne at 9:31 am